Anatomy of a Volcano

Get Hopping: Volcanoes 101
Anatomy of a Volcano

Now that you know where to find these amazing volcanoes, it’s helpful to know a little bit about what makes them tick. What is going on under the visible outer layer? While each volcano has their own unique style and swagger, they are fundamentally the same.

Check out the illustration I’ve created for you below (you can click on it to make it bigger): 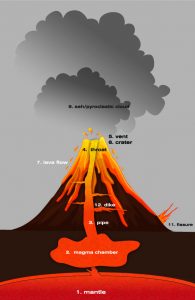 Here are the major parts:

From our tour of the Earth’s interior, you’ll remember that the mantle is the area of molten rock directly below the Earth’s crust. This is where all the fun begins. Rock that is under intense heat and pressure circulates here.

If the magma from the Mantle finds any cracks or weaknesses in the lithosphere, it will rise up to fill these voids. Rock is generally somewhat pliable, so as the ground can expand to form a reservoir of sorts that the magma will rise to fill like a giant underground swimming pool.

This is a vertical pipe that rises up from the magma chamber and connects to the throat.

The throat is the entrance to the volcano’s pipe and is closely related to the vent.

The vent is the point where the magma breaks through the surface of the crust.

A caldera or crater is a bowl-like depression where an eruption as taken place.  As a volcano prepares to erupt, magma gathers under the surface of the volcano.  Once it has erupted, that space that the magma once occupied is empty, and the crust falls in on itself to create this bowl.

When magma breaks through to the surface, it is called lava.  When all this lava gets moving, it tends to flow like a dense liquid – hence the name lava flow.

When the eruption is over and the lava hardens, it forms a plug in the vent.  The outside of this plug will harden first, and so the hot magma still beneath it causes it to rise up into a dome-like shape.

Explosive eruptions especially tend to eject fine rock particles called ash and larger particles called pyroclasts.  When a lot of this material is ejected at once and really gets rolling, it can move in a cloud at around 300 mph.  This is called a pyroclastic flow.

If there is water of any sort involved during an eruption (rivers, glaciers, lakes, etc.), there is a chance of a lahar forming. A lahar is a mudflow that rolls downslope like a river but has the consistency of cement. It is extremely destructive and will bury or sweep away anything in its path.

A fissure is a crack or tear in the ground where lava erupts, but not usually with explosive force.  This is common on shield volcanoes like Kilauea, and the red-hot lava tends to fountain out of it.

Inside of the volcano, there are all sorts of cracks in between the rocks.  Magma will find and fill these cracks and harden.  Once they’ve hardened, they are known as dikes.

Graphic thanks to, and designed by, Freepik.com (http://www.freepik.com/free-vector/volcano-background-design_1077475.htm), with a little educational tweaking by Volcano Hopper.