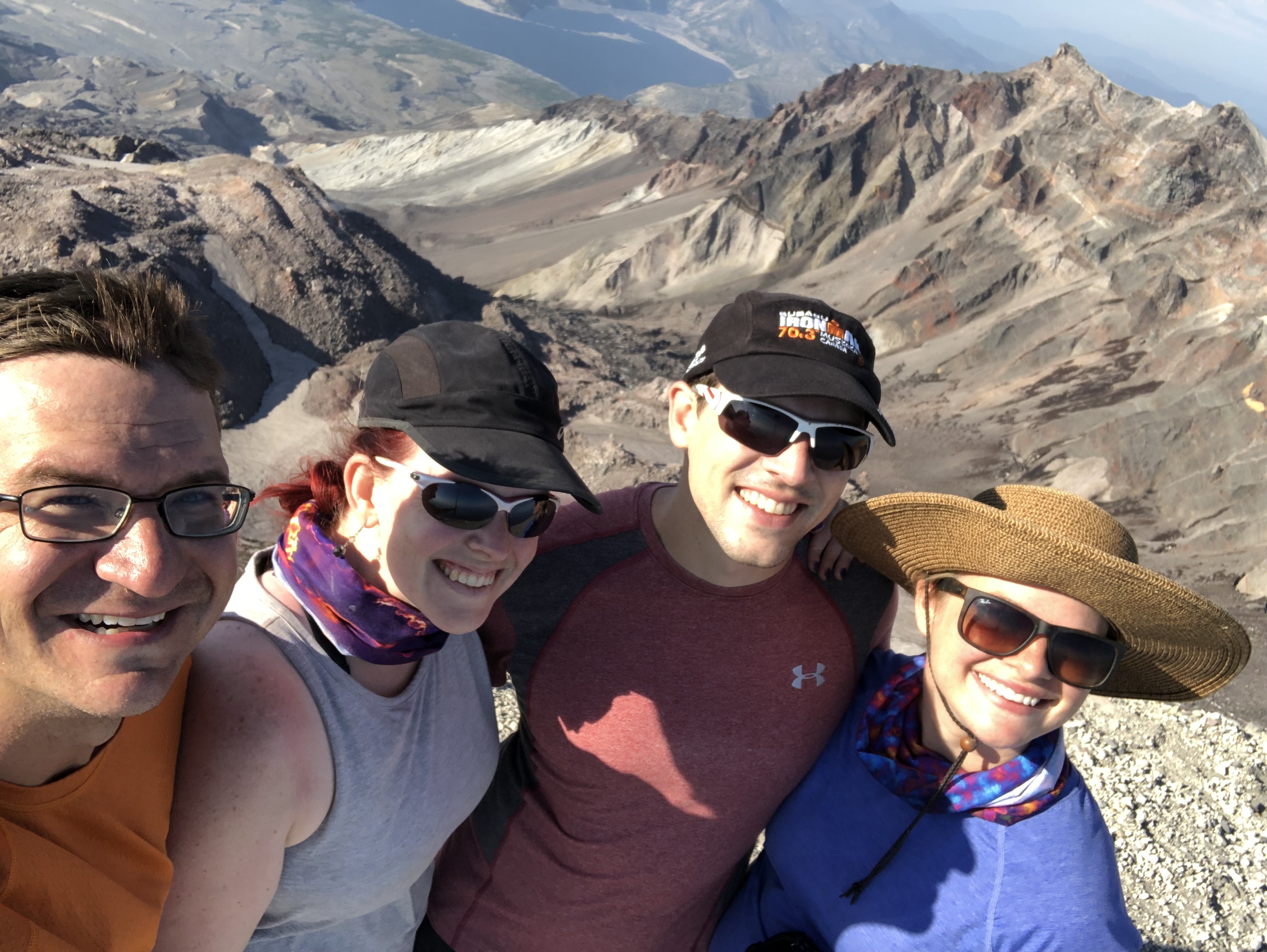 Three steps. Two.  One.  Suddenly, Mount St. Helens’ crater stretched wide open in front of me.  The rim of the crater curved around to the north like eagles’ wings.  An enormous lava dome that dwarfed everything around it sat perched in the heart of the mile-wide crater.  The lava dome itself sat steaming happily away, tendrils of the white steam curling up toward us.  The sharp scent of sulfur – like rotten eggs – made my nose sting.

Staying back from the very edge of the crater, we rested and observed Mount St. Helens.  I certainly felt this was a rare opportunity to not only to be standing on her summit, but to be able to be so close to the activity inside the crater.  The inside of the crater is covered in different layers and compositions of lava: rhyolite, dacite, andesite, and basalt.  Each is in different stages of oxidation, which paints the crater walls in a rainbow of colors.  Bright yellow streaks of sulfur accent the reds, blacks, browns and grays of the crater walls.  A glacier wrapped around the top of the lava dome, just beneath our feet. Rockfalls happened every few minutes – caused either by small earthquakes or unstable ground – and sounded like rolled dice as they cascaded down the crater walls.  As rocks fell across the glacier, they tore up the ashy coating on its surface to reveal pearly white snow beneath it.

Through the crater breach on the north side, we could clearly see into the 1980 blast zone. We spotted Johnston Ridge, the Johnston Ridge Observatory, Boundary Trail, and Harry’s Ridge where we had hiked only two days before.  Spirit Lake sat straight out to the north, white logs still bobbing in its blue waters.  Behind the lake, Mount Rainier stood magnificent in the distance.  Mount Adams was to our east and Mount Hood peeked out from the haze to the south for the first time all day.  Four volcanoes, all within an 80 mile radius.  It was an incredible sight!

I kneeled down for a few minutes, resting and running my fingers through the ash at Mount St. Helens’ summit.  I enjoyed the swirl of the cool breeze and the continual sound of the rockfalls.  Between this and the unintentional blood pact my arm had made with one of her boulders earlier, this was volcano bonding at its finest.

But the summit was only halfway.  The four of us still had to get down the volcano’s slopes.  It had taken us nearly 9 hours to reach the summit; twice as long as it should have.  But we had prepared for this outcome, and were ready for a hike in the dark.

I hated to leave the summit after so short a visit, but we needed to make tracks with what daylight was left.  We half-ran down the ash field, the ash squishing like sand beneath our boots and making rude noises. We made it to the boulder field and monitoring equipment as the sun began to dip below the western horizon. The entire landscape was suddenly bathed in ribbons of color.  Pinks, oranges, and golds of every hue flooded the sky.  The hills below turned deep violet.  The shadow of Mount St. Helens stretched in a perfect pyramid toward Mount Adams’ base.

The last rays of sunlight faded, leaving us in almost complete darkness.  A crescent moon acted as our compass and the sky was sprayed full of stars.  The Milky Way stretched southwest and ended in the orange glow that was Portland, 50 miles distant.  It was the most beautiful night sky that I have ever seen.

We picked our way downward through the boulder field.  Oddly enough, going down was harder on my body than going up had been. The impact on the knees and feet is just tough at that angle.  The four of us spread out through the boulders just enough that each hiker’s headlamp acted as a beacon to show where the trail was winding.  Everything was going smoothly and we were making great time.  I wondered, more than once, what the lava dome would look like if we could have stayed on the summit after dark.  There was obviously significant heat below its surface.  Would it glow softly in the blackness?  Wondering was a good distraction for the hike down.

But then, I was in for another surprise.  Something enormous and eight-legged ran across the toe of my boot.

Now, I’m not afraid of much.  Snakes are cool, heights don’t faze me, and I’ll run over an active lava flow any day of the week. But spiders?  No.  Thank.  You.  And that is exactly what had just scampered across my boot.  I suddenly recalled the nickle sized holes that I had spotted here and there on our way up the volcano.  Tired as I was, I had just assumed they were created from another hiker’s poles.  I dug my own hiking pole into the ash and realized that I couldn’t make the same impact.  They were spider holes.  And the spiders had all come out at night.

That spider was not the last I’d encounter that night.  As we climbed down the boulders and scooted along on our butts, one would dart across a my boot or over my leg.  One went scampering across my glove as I clutched a boulder for balance.  Talk about keeping your cool!  If I’d have let go of the lava to shake the spider off, I would have been cartwheeling down the ravine to my left.  The spiders didn’t seem to care that I was there, so they ignored me for the most part.  That indifference helped me keep calm, but their presence sure motivated me to get down the slope!

We made it to treeline as the moon began to dip behind the western horizon.  But we had lost the trail!  We knew it was nearby, but we had come up short. Thankfully, Paul had purchased an excellent GPS beacon that had dropped breadcrumbs as we hiked.  He referenced the beacon and we found the trail, twenty feet away.  Hooray for modern technology!

The darkness inside the forest was suffocating.  The moon had set and the starlight had been extinguished by the thick cover of leaves.  But there was a trail here, and one that we could navigate quickly.  We hurried the last couple of miles, with shouts of “Shoo Kitty!” and “Here Bear!” to chase off any cougars or bears hankering for a midnight snack.

Footsteps on the trail ahead of us made us freeze in our tracks.  Then a flash of light.  Two hikers were coming up the trail toward us, starting their own summit attempt.  We chatted for a moment and learned that their plan was the same as ours had been: to get above treeline before sunrise.  We wished them luck.  A few days later on Twitter, I spotted one of their sunrise pictures.  It had been a perfectly clear morning as the orange orb of the sun rose over the evergreen hills.

The four of us burst from the trees into the Climbers’ Bivouac just after 1:00 in the morning. We signed out on the register and tumbled into the Jeep, covered in ash.  Paul drove us from the trailhead back to Woodland where the only thing that was open at two in the morning was the local McDonalds.   I’ll tell you what, that quarter pounder and Coke was the best thing I’d ever tasted!

So, in hindsight, were we crazy to go up that volcano?  Probably.  But I would do it again in a heartbeat.  I’d love to give the summit hike another try someday – this time without an ER visit the day before.

The summit climb up Mount St. Helens took its toll on me physically.  I won’t lie – I was exhausted.  As much as I ached to be back on the volcano’s slopes, I wasn’t able to do any further significant hiking for the rest of our trip to the Pacific Northwest. We did get to rest and explore some other volcanic spots in Oregon, so I’ll bring you along on those adventures in our next post. I fully intend to return to Mount St. Helens in the very near future and investigate the areas that I didn’t have a chance to fully explore this time.

Are there any specific places you would like for me to visit during my next trip to Mount St. Helens? What things would you like to see?  Tell me in the comments below!