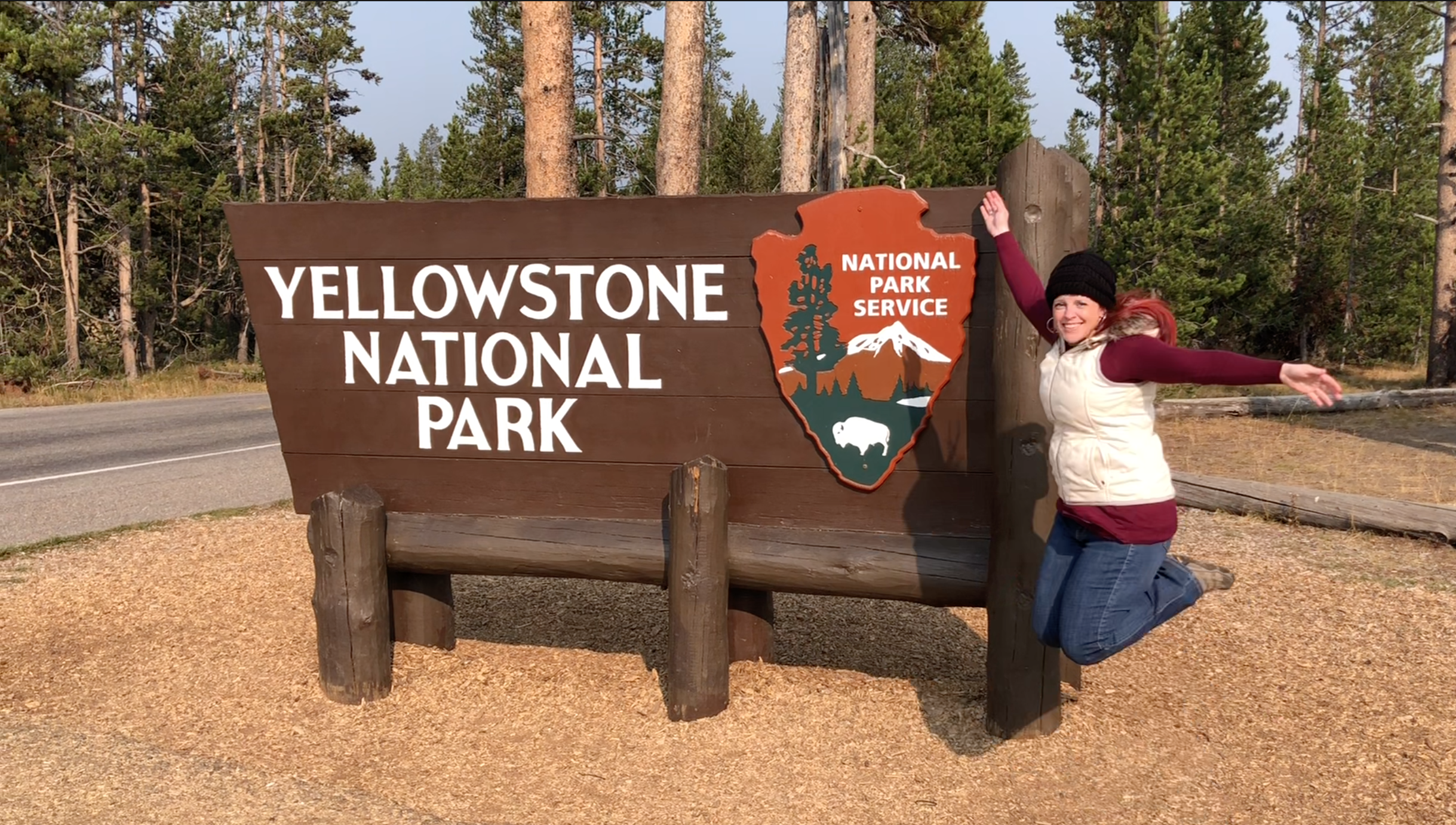 Sit back and close your eyes. When I say the name, “Yellowstone,” what springs to mind? Do you see a national park full of sweeping forests and gushing rivers? Vast herds of buffalo grazing on the sweet grasses and grizzly bears romping through the hills? Are you imagining the hot, white spray of a geyser as it shoots water two hundred feet into a crystal blue sky? And do you imagine the throbbing pulse of a volcano just beneath your feet as you stand in the heart of the park?

Sometimes that last question catches people off guard. Many people who visit Yellowstone each year have no idea that they’re visiting an active volcano. However, it is the Yellowstone volcano that creates such a fascinating and other-worldly terrain. Yellowstone is so unique and unusual that no one believed the stories of returning fur traders in the 1700’s, deeming their tales “frontier fiction.” Yellowstone was made into the nation’s first national park in 1872 in order to protect its incredible features.

2020 has been a year as unpredictable and wild as a volcano. Our plans were scrapped, readjusted, and scrapped again as the coronavirus pandemic took hold. Finally, a window of opportunity opened for us to go explore Yellowstone – exactly a decade after we first visited.

Let me give you a quick overview of Yellowstone before we set off on our journey together through its exquisite features!

A Look at the Map

First off, let’s take a look at a map. Check this map out. It details the park’s roads and places to spend the night (be sure to book your lodging in advance if you are staying inside the park), but you can also see the outline of the caldera and some of the area’s geology.

You can enter the park from any direction. The 5 entrance roads merge into a double loop that forms a “figure 8” through the park. There are 466 miles of roads that you can drive once you’re in Yellowstone, and almost a thousand miles of trails to hike. I definitely recommend getting off the beaten path a time or two. You’ll be surprised at how absolutely quiet it is – and how recharging it is to the soul.

The park is huge. As the bird flies, it is 63 miles north to south and 54 miles east to west which totals a whopping 3,472 square miles. Nestled in the southeastern area of the park is the massive Yellowstone Lake. At 136 square miles of water and 110 miles of shoreline, it’s the largest high elevation lake in North America. The average altitude of the park is 8,000 feet above sea level so be sure to drink plenty of water and stop to catch your breath every now and again.

Aside from the spectacular wildlife, Yellowstone is most famous for its geothermal features. Old Faithful Geyser tends to pop to mind first – it’s one of the most easily accessible and reliable attractions in the park. However, there are more than 300 geysers in the park to watch (some of which are even bigger and badder than Old Faithful), and over 10,000 thermal features. Yellowstone Volcano fuels all of these.

A hotspot in Earth’s mantle fuels the Yellowstone volcano. (Check out Volcano 101 for more detail on this process). The volcano is fed by a hot mantle plume. This plume does not move, but the plate on top of it does, and so if you look at a satellite image of the United States, you can actually see a trail of very old volcanic calderas that previous eruptions have left behind. The latest of these calderas sits at the lower half of the park and measures 45 miles by 30 miles in diameter.

Yellowstone has historically had a major eruption every 600,000 – 800,000 years on average. The last mega-colossal eruption was 640,000 (give or take a year) years ago. The largest eruption was 2 million years ago. The output of ash and lava from this eruption dwarfed most other eruptions in history (La Garita’s eruption being one notable exception.) Do you remember Mount St. Helens eruption in 1980? This one was 2,500 times bigger! It even makes the Tambora eruption (called the most devastating in human history) look puny.

While the volcano hasn’t had a major eruption recently, it is still very active. The heat from its magma chamber creates the fascinating geothermal features at Yellowstone, and the park experiences about 2,000 earthquakes a year.

Here are the 4 predominant geothermal features that we will come across during our trek through the park:

The word “geyser” comes from an Icelandic word meaning “to gush,” which is exactly what they do. Nothing quite compares to the experience of watching a massive amount of water gush from the ground. But how does this phenomenon occur?

It starts with a good rain or snow storm. The water soaks into the ground and makes its way deeper into the crust of the earth through the layers of porous rock. This water can travel down as deep as 10,000 feet! This is such a distance that sometimes it takes the same rainwater 500 years to return to the surface. Crazy, huh? (It’s fun to imagine watching Old Faithful spew water from a rainstorm that happened during the Middle Ages.)

When the water reaches those depths, it comes in contact with the heat from the volcano’s magma chamber. The water heats to up to 700 degrees Fahrenheit. You would think that it would boil away at those temperatures, but it doesn’t. The pressure at those depths prevents it from doing so. Instead, the heated water becomes less dense and pushes upward through the cracks in the rock.

The rocks that this water pushes through are typically comprised of rhyolite. A key feature of rhyolite is that it contains a ton of silica. And silica is a key ingredient in making glass. So, as the water dissolves the silica from the rhyolite around it, it creates a glass-coated piping system. This coating keeps the pressure and water sealed safely inside of it. As cracks in the ground become narrower, the pressure that is pushing the water upward increases, sort of like if you put your finger over the opening of a garden hose. As the water reaches the surface of the crust, the sudden reduction in pressure causes the water to boil. Combine that with the constriction in the pipe system and the water gets forced up and out of the ground in a magnificent spray of water.

Very similar to a geyser, ground water that has come in contact with heat from the magma chamber is pushed back toward the surface. However, the cracks in the ground have not become coated with the silica lining and are not tightly constricted, so the water can boil and flow freely.

These hot springs are usually very colorful. Organisms such as green algae thrive in the heated conditions, and dissolved minerals such as sulfur (yellow), manganese (pink), and iron oxide (red) create distinct bands of vibrant color.

Less water is involved in creating these bubbling, spattering puddles of mud. Instead, hydrogen sulfide gas is present, leaking upward through the ground. Microorganisms love the stuff and convert it into energy. When they do so, they create sulfuric acid as a byproduct. Ever smell that funky rotten egg scent? This smells just like it. The sulfuric acid dissolves the nearby rock into mud and, as more gas releases, the mud bubbles and splatters.

Fumaroles and solfataras are vents where hot gases and steam escape through cracks in the ground. These are hot to the touch, and you can sometimes hear them roaring from a mile away.

Okay, those are the basics. So grab your pack and let’s go explore Yellowstone!

Next article Fearless Footsteps Has Arrived!

Awsome blog this is!
A VEI 8 is not possible at the moment,
not enough eruptible melt in the system.
But probaly a slow ryholite eruption is a possibilty in the future.

Pitchstone Plateau ryholitic glass flow is the latest lava flow from Yellowstone.
Late Pleistocene. These flows can have volumes of 60 km3 and erupt very slowly over timespanns of 40 years. Degassed ryholite that came up. Very slow gentle flows, over 150 meters thick and perhaps 40 kilometers long. Erupted slowly.
It woud a awsome sight and tourist trap today if souch a obsidian flows erupted at Yellowstone today. Puyhue did a similar but much much smaller flow in 2011 I think. ( an obsidian flow starts of with a hissing vent and then glowing blocks emerge )

Hi Jesper! Great to see you here. Thanks for the fantastic additional information about Yellowstone and its eruptions. I appreciate the wealth of knowledge that you have about all things volcanic!

Small basaltic events around the caldera is a possibilty too, with something small like Puna 1961

The next eruption will be small and touristy, most likley sillica rich, with perhaps a small subplinian and pumice cone.

Small basaltic events around the caldera is a possibilty too, with something small like Puna 1961

The next eruption will be small and touristy, most likley sillica rich, with perhaps a small subplinian and pumice cone.

The most likley eruptions today there are small lava domes in the caldera, and small basaltic cones and flows outside it. All eruptions will be monogenetic features.