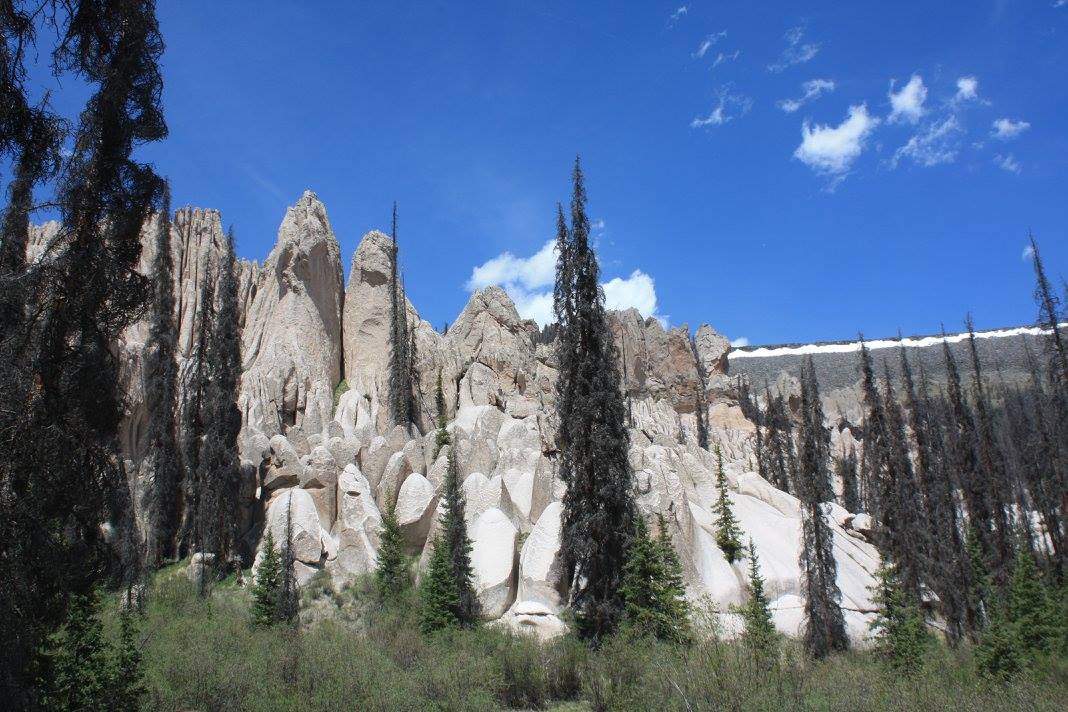 As a kid, I wanted nothing more than to have a volcano or two within exploring distance. Given that I was 8 years old and couldn’t drive, that distance was about five miles. My friends and I used to make up stories that the nearby mountains were volcanoes and could erupt at any moment just to sate our sense of adventure. As far as we knew, the only volcanoes in the United States were Yellowstone, in Hawaii, or along the West Coast. The rest of the world’s volcanoes were in far off, exotic places like Japan or Iceland. Little did we know that real volcanoes were closer to home than we ever imagined – including the most explosive and epic eruption in Earth’s history: La Garita.

La Garita Caldera sits in the middle of Colorado’s San Juan Volcanic Field. Located in the southwestern part of the state, the volcanic field was once extremely active. Two continental plates once collided here and caused the ground to fracture and faults to form. These faults allowed heated magma from the Earth’s mantle to rise and pool in massive magma chambers beneath the crust. The results were often explosive.

What is a Caldera Eruption?

Volcanic eruptions here most commonly occurred in massive caldera eruptions. Caldera eruptions are a little bit different than what you might imagine a volcanic eruption to look like. Instead of a more conical volcano that might gush red-hot lava down its sides, caldera eruptions tend to happen when a build up of magma in a chamber beneath the Earth’s crust causes the rock to bulge. The pent-up pressure becomes too much for the surrounding rock and an explosion happens. The eruption continues until the pressure subsides or the magma chamber is emptied, usually in a very short amount of time. When the magma chamber is emptied, the weight of the rock on top of it collapses inward to leave behind a large, round depression.

At least 15 volcanic calderas have been identified in the San Juan Volcanic Field. Due to age, erosion, and newer eruptions covering old calderas in lava and ash, it can be extremely difficult and take years to identify old caldera boundaries.

A View From Space

Pull up Google Earth and take a look at the satellite view of the San Juan Mountains in Colorado. These calderas and resurgent lava domes (where lava pushed back up after the eruption) are easily recognizable, even from space! Though the activity in this area has long been extinct, scars from the eruptions have left a permanent mark on the landscape. The largest of these was left behind by the most epic eruption in history: La Garita Caldera.

The largest of the 15 calderas in the San Juan Volcanic Field is La Garita Caldera. Stretching approximately 22 miles x 47 miles, the caldera is one of the largest in the world.  Using current dating techniques, scientists believe that La Garita was last active approximately 26.3 million years ago (that’s more recently than the dinosaurs were believed to exist). The volcano’s biggest eruption ever? That happened approximately 27.8 million years ago and is considered the most energetic eruption in the history of the planet.

The VEI (Volcanic Explosivity Index) scale was created to depict the explosiveness of any given volcanic eruption. Things like the eruption height and quantity of material erupted factor into the measurement. An eruption with a VEI of 0 is less explosive; a VEI of 8 is as explosive as you can get.

Think of some of the volcanic eruptions in recent history that you’ve heard about:

All of these eruptions seemed absolutely violent and enormous to us, right? We’ve only reached up to a 6 on the scale. So, you mean, there were bigger and even more violent eruptions?!

So what’s a VEI 8? We are now talking supervolcanic eruptions such as Yellowstone, Cerro Galán, and Toba. The biggest of them all, however, is La Garita.

The Most Explosive Eruptions of them All

The VEI scale increases in explosivity by factors of ten. Some scientists believe that a ninth level should be added to the VEI scale to accommodate volcanic eruptions that fall into that explosive category. There is only one known volcano that would rank as a 9 on the VEI scale – and that’s La Garita coming in at a whopping 9.2. For now, VEI 8 is literally as big as you can get.

Take a look at some of of the eruptions that rank as an 8 on the VEI scale. The amount of material erupted is staggering:

La Garita erupted approximately 5,000 km3(1,200 cubic miles) of material in a single eruption: the Fish Canyon Eruption. That’s twice the volume of any other eruption in the history of the planet.

The Fish Canyon eruption – the most epic eruption in history – created what is now known as the Fish Canyon Tuff. Tuff is light and porous volcanic rock that is created by layers of ash consolidating into solid pieces. The Fish Canyon Tuff is made up mostly of ignimbrite (pumice pieces that are created by pyroclastic flows). The lava itself is made of dacite and a little bit of andesite, both of which are highly explosive. Fallout from this eruption covered a significant part of the state of Colorado, some of which can still be unearthed today. Better yet, it left a beautifully exposed tuff deposit visible for us to study and explore at Wheeler Geologic Area.

At least seven major eruptions occurred at La Garita since the epic Fish Canyon eruption. They left different lavas and formations behind for scientists and explorers to discover. Formations such as the Pagosa Peak Dacite were created by fountains of pyroclastic material.

I discovered La Garita’s existence in my early 20’s. I had kicked back and was reading The Fundamentals of Physical Volcanology1when I found it: a chart naming the largest and most epic eruptions in the history of the Earth. Right at the top, it said: “Fish Canyon Tuff – La Garita, Colorado.”

I sat straight up. Say what? This sent me on a whirlwind of discovery. There were more volcanoes in my own backyard than I’d ever dared to imagine! And now with a driver’s license, it was time to go exploring!

I quickly learned of a place called Wheeler Geologic Area near the silver mining town of Creede. Volcanic activity in the San Juan Volcanic Field was instrumental in creating veins of silver and gold that drew miners to the area in the late 1800’s. Wheeler Geologic Area, sitting 10 miles outside of town, is a wonderfully preserved area of exposed Fish Canyon Tuff. Due to erosion and weathering over the centuries, the area is full of breathtaking rock formations that gleam almost white in the sunlight.

Wheeler Geologic Area was named after Captain George Wheeler. Captain Wheeler was the first person to survey the area for the United States Army. Can you imagine what he must have thought of this place? He likely wouldn’t have known it was the remnants of a volcanic eruption, much less the most epic eruption in history!

Wheeler Geologic Area was named a national monument in 1908 – Colorado’s first. It became a part of the protected La Garita Wilderness in 1950. The area is accessible to explorers, but it’s not an easy trip. The only way into Wheeler is on foot or by ATV, and it’s a 14-16 miles round trip depending on how you choose to get there. So, of course, I can’t turn down a good challenge and decided to plan a trip.

Besides, who could turn down a chance to explore the remnants of the Earth’s most explosive and epic eruption?

Next Up: One “Tuff Hike” – The Trail to Wheeler Geologic Area