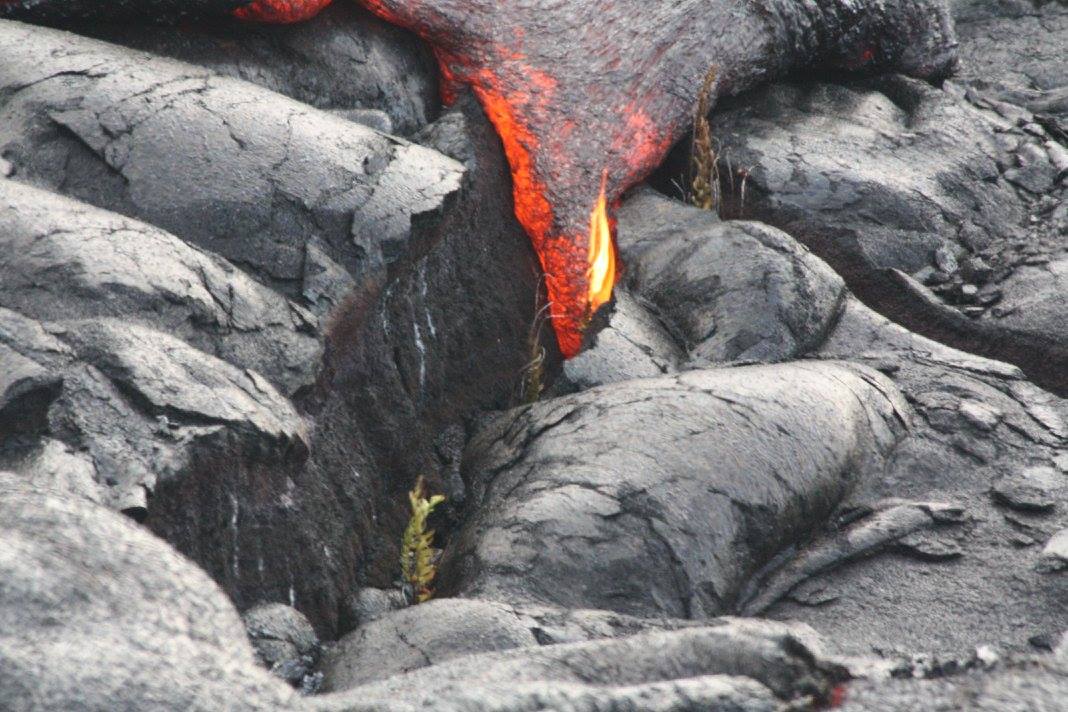 In May 2017, we hiked over Kilauea’s eastern slopes to intercept the 61G lava flow. The flow, which issued from the Pu’u O’o vent, had been showing stunning displays of activity for several months. Out of my many visits to Kilauea, this would be the first time that we would get to experience an active lava flow, and all the sights, sounds, and smells that came with it. I knew what molten lava looked and sounded like from the thousands of videos I had watched over the years. But I was curious— what does molten lava smell like?

We met a group of friends at the bottom of Chain of Craters Road before the sun had risen. The ocean crashed against the lava cliffs to our east and a swath of stars stretched out in a band overhead. Making sure we each had plenty of water, food, and sunscreen in our packs, we set out in the dark. Only our headlamps and the red rivers of lava cascading down the pali, six miles away, lit our path.

Dawn broke over the choppy waves of the Pacific Ocean as we left the trail and began to pick out way over old lava flows. Ropy black basalt, called pahoehoe, stretched out in every direction as far as the eye could see. We came across ragged sections of lava, called a’a. We joked that it’s called “a’a” (pronounced: ah ah) because that’s the sound you make when you step on the sharp stuff barefoot.

Pahoehoe and a’a can come from the same lava flow. Pahoehoe generally is created when the molten lava is hot and has a lower viscosity. This means that it flows easier, sort of like honey. Pahoehoe also tends to form when the lava has a slower flow rate and lower volume.

A’a, on the other hand, forms when the lava has cooled slightly and is more viscous. When this happens, it becomes “sticky” like peanut butter and tends to tear itself apart as it flows. This tearing action helps give it a jagged form. A’a forms when the lava flow’s volume and flow rate increases.

Regardless of the type of lava found on Kilauea—or any volcano, really— you don’t want to fall on the stuff. It’s sharp and you’ll become blood buddies with the volcano.

The sun rose higher into the sky and cast its light onto the black basalt lava flows that formed the volcano’s base. The black rock reflected the gold light, making it shimmer that same color. Volcanic glass and crystals sparkled and shimmered in the lava, like a sea of gemstones.

We paid careful attention to every step over the cracked and uneven old flows. On occasion, we’d pass a skylight — a hole in the lava — that revealed a hidden lava tube beneath our feet. We took great care to go around them.

As we neared the head of the lava flow, tiny ferns and grasses that had begun to take root in the older flows vanished. The humid warmth of the spring morning gave way to an oven-blast of heat. Sweat beaded on our skin and trickled down our backs. The air quivered like a mirage.

The lava glowed hues of red and orange, a sharp contrast to the black basalt it was covering. A silver crust formed over the flow as it leisurely advanced. Moments later, the molten lava would break through and resume its course toward the ocean.

Volcanoes create some pretty interesting (and mostly nasty) smells. Each volcano is different from the next, and so is each eruption. A volcano may create a lava flow or eruption that smells strongly of sulfur one week, and absolutely nothing the next.

Most of the smells in a volcano’s arsenal are created by the gases that it emits. In Yellowstone, for instance, you’ll find the pungent odor of rotten eggs near the geyser basins and Mud Volcano. The stinky scent is hydrogen sulfide gas, which is created when microorganisms dine on the volcano’s sulfur deposits. The byproduct of their dinner is sulfuric acid, which eventually evaporates into a gas.

All lava has some degree of trapped gas inside of it. The more explosive the lava, the higher gas content it tends to have. For example, the basalt lava in Hawaii will have less gas content than the explosive rhyolite, andesite, and dacite found at volcanoes like Mount St. Helens. The most common gases found in lava are water vapor, carbon dioxide, sulfur dioxide, and hydrogen sulfide. Sulfur, fluorine, and chlorine gases are also found in lava.

One important note: it is not safe to breathe any of these gases. Volcanoes emit gases that do not place nicely with the human body. If you are visiting a volcano and are near volcanic gas, either steer clear or be sure to wear a mask that will filter out these gases. The results can be deadly if you do not use caution.

Occasionally, lava will take on the scent of whatever it is burning as it flows. For instance, if it is flowing through a forest or over grass, it may smell like a campfire as it incinerates the organic material beneath it, as we experienced on Kilauea.

As we watched the 61G lava flow at Kilauea, we were surprised at the campfire scent that the lava flow produced. We might have been tempted to break out the marshmallows and roast them if it weren’t considered a show of disrespect.

However, one of our friends did accidentally drop an apple. He had been eating it as a snack when it slipped through his sweaty fingertips and bounced off of the hardened lava into a channel near the flow. It was far too hot to retrieve it, and the volcano didn’t seem to mind. We watched, astounded, as the lava changed course and went to devour the apple. The scent of hot apple pie flooded the air as the volcano finished off the snack.

That was the first of several hikes out to explore the 61G lava flow in 2017. Each time, Kilauea’s lava smelled like a campfire as if she were inviting us to kick up our heels and stay awhile.

What Do You Think?

If you have never been to a volcano or seen an active lava flow, what do you imagine that lava smells like? Tell me in the comments!

Facebook0Tweet0Pin0
Previous articleFlorissant Fossil Beds: A Window to the Past