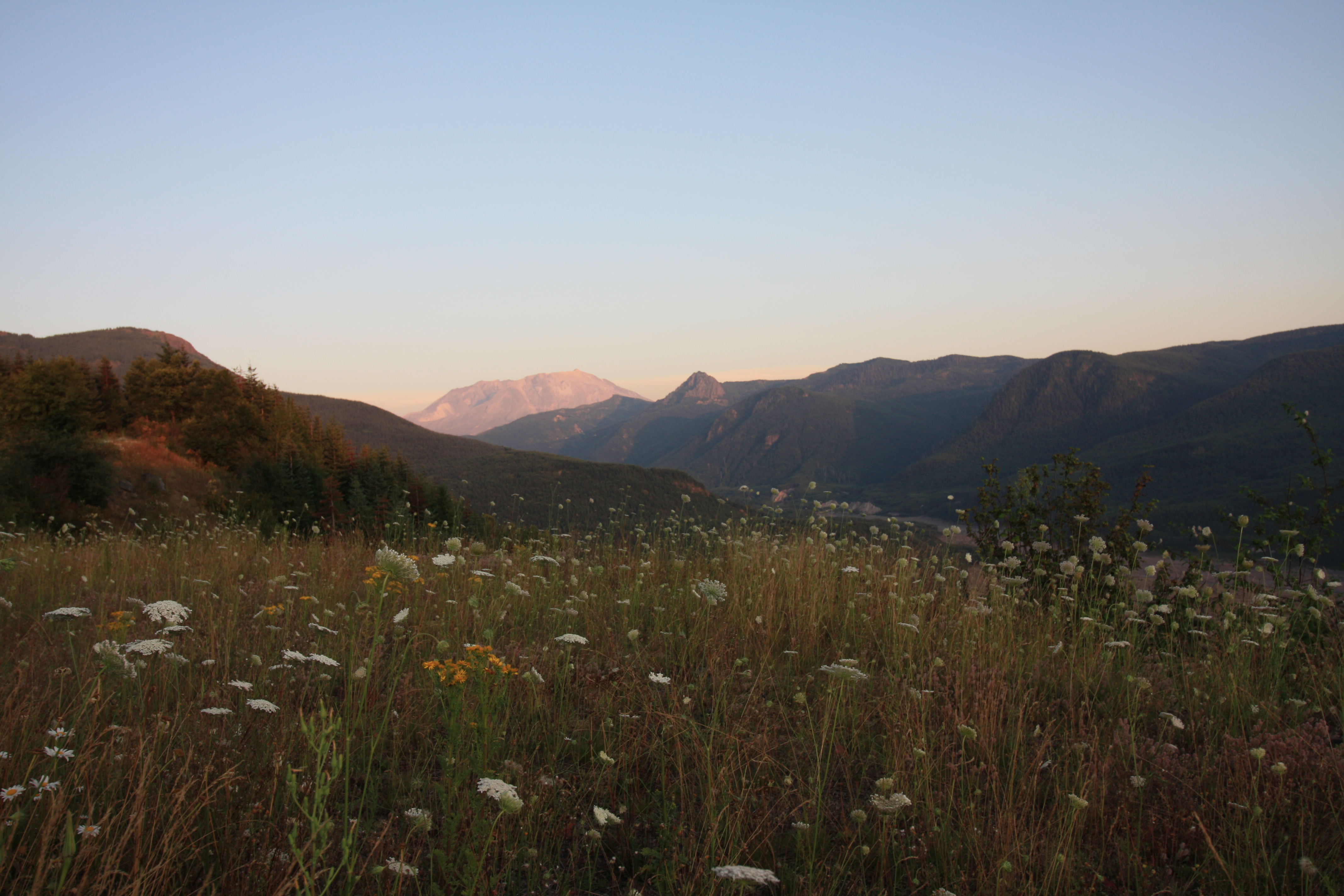 Mount St. Helens and the Gifford Pinchot National Forest that surrounds her are packed with volcanic features to explore and amazing areas to hike.  With so many adventures to be had, where should we even begin? The answer was unanimous: The Spirit Lake Memorial Highway to Johnston Ridge Observatory.

My partner in crime, Jason, and I had met up with my brother and sister-in-law the night before at our cabin on Mount Hood.  We snuggled up inside the cabin’s golden timber walls, feeling the crisp mountain breeze blow through the windows as we settled in for the night. Rising with the sun and feeling refreshed after traveling the day before, my sister-in-law, Alex, spoiled us with her fantastic cooking skills, frying up some eggs and toasting fresh bread from a local bakery.  Bellies full and a spring in our step, we were ready for adventure!

We zipped through Portland and over the mighty Columbia River.  Heading up I-5 toward the town of Castle Rock, Washington, we were amazed at the sheer quantity of trees and how enormous they are.  Back at our Base Camp in the Rockies, the forest is not nearly as thick as it is in the Pacific Northwest and the trees are not half as tall.  As we ventured north, the landscape began to change in subtle ways.  Age-old deposits of ash and basaltic lava flows popped out here and there.  I wiggled my toes in excitement.  I knew we were getting closer.

Highway 504 meets I-5 in the small town of Castle Rock.  We made a pit stop at a local gas station to refuel the Jeep and pick up some snacks.  Johnston Ridge Observatory is another 50 miles down the road, and there is only one other gas station in the town of Toutle, so we made sure we had plenty of gas and food.

Munching on peach rings (a road trip favorite since childhood) and trying out a bag of pickle chips (they sounded interesting, okay?), we put the Jeep into Drive and headed east along Highway 504.

We ducked inside for five minutes to investigate the place.  There was an art show taking place with dozens of local artists showcased. The front desk staff was very helpful, and provided a map of the highway and interesting newsletter about the volcano and local happenings.  The Visitor Center also houses a movie theater and exhibit that costs to explore.  The four of us were anxious to get to the volcano, so we skipped the exhibit and hopped back in the Jeep and drove up the road to the next stop.

Buried A-Frame House
As we passed through Kid Valley, we spotted a popular tourist attraction on the right side of the road: a buried A-frame house.  The red house with it’s brown, shingled roof is about 25 miles from Mount St. Helens as the bird flies, but the eruption on May 18, 1980 caused significant damage here.  How?  A lahar.

A lahar is a volcanic mudflow. When an eruption takes place, the ash and silt mixes with melted snow or river water to create a roiling river of mud.  The flows can be as thick as concrete and move extremely quickly.  In this case, the ashy, gray lahar from Mount St. Helens came ripping down the Toutle River at 70 miles an hour, flooding up into Kid Valley and destroying the homes here.

The newly built A-Frame house’s lower level was filled with 200 tons of ash, mud and silt from the lahar. Today it is still buried up to its second level.  Visitors can take a walk through the house and pose with a 28-foot statue of Big Foot.

We did not stop to explore. Daylight was burning and at this first evidence of the eruption, we were more eager than ever to keep trucking down the road.

Mount St. Helens Forest Learning Center
As we continued down Highway 504, the terrain became increasingly hilly.  Rounding a bend nearly 34 miles from Castle Rock, we spied the Mount St. Helens Forest Learning Center on the right side of the road.  On the outside, it looks like a welcoming forest lodge.  A volcano-shaped playground is nestled against the side of building for the kiddos to play and burn off some energy.  To the south of the building, the Toutle River winds peacefully through the valley.  And to the east, Mount St. Helens was finally showing off her beautiful, ashy peak.

We stood and simply stared at the volcano in awe for a few moments.  Behind the field of white and gold wildflowers, she stood tall and magnificent.  The morning haze had slowly begun to clear, allowing us to see the whitish-gray gleam of her steep slopes.

The four of us climbed to the top of the nearest hill, which doubles as an observation point for the Toutle River.  That sunny Sunday, the river wound peacefully through the valley floor.  But on May 18, 1980, a lahar 150 feet thick ripped through here at speeds of up to 70 miles an hour.  You can still see the damage the lahar did to the river valley; sections still lay completely bare where trees and foliage were stripped from the landscape.  Staring down at this peaceful river, it was difficult to imagine such force and fury tearing through this place, taking out homes and bridges, sweeping away cars and clogging the rivers downstream.

The next thing we noticed was the absence of large trees.  Across the road, there were smaller, younger trees that had been planted only in my lifetime.  We realized suddenly that we were in the blast zone from the 1980 eruption. The force of Mount St. Helens’ blast had completely leveled the forest, even this far from the volcano!  I could easily understand how people this far out would have thought they were safe from whatever mischief the volcano was planning.  Unfortunately, they were far from safe.

The Forest Learning Center and the land that surrounds it is managed by Weyerhauser, a logging company in the Pacific Northwest.  They have taken great care to try and restore the forest to what it once was in the years since the eruption.  It took hundreds of people seven years to replant the trees that you see today.

Stepping inside the Forest Learning Center, we had two minutes to get into the Eruption Chamber before the movie began to play.  The Eruption Chamber is a small theater reminiscent of a cave.  Rows of faux fallen logs serve as seating. The rest of the room has been designed to look like it has been caked in ash from an eruption.  A short movie played on the screen near the front of the chamber.  The footage and information was excellent.  It was startling to watch footage, taken in May 1980, from the very spots we had just been standing outside.  Views of the eruption and the lahar, even from this distance, were simply breathtaking.

On the other side of the Eruption Chamber, we stepped into a very detailed display that winds through the Learning Center.  Photos and samples from the 1980 eruption are on display with detailed explanations of how the eruption impacted the forest.  The staff inside the Learning Center were extremely friendly and knowledgeable.  We would have loved to talk to them all day and hear their stories.  But Mount St. Helens was calling to me like a siren, and I was ready to get even closer to her mighty slopes.