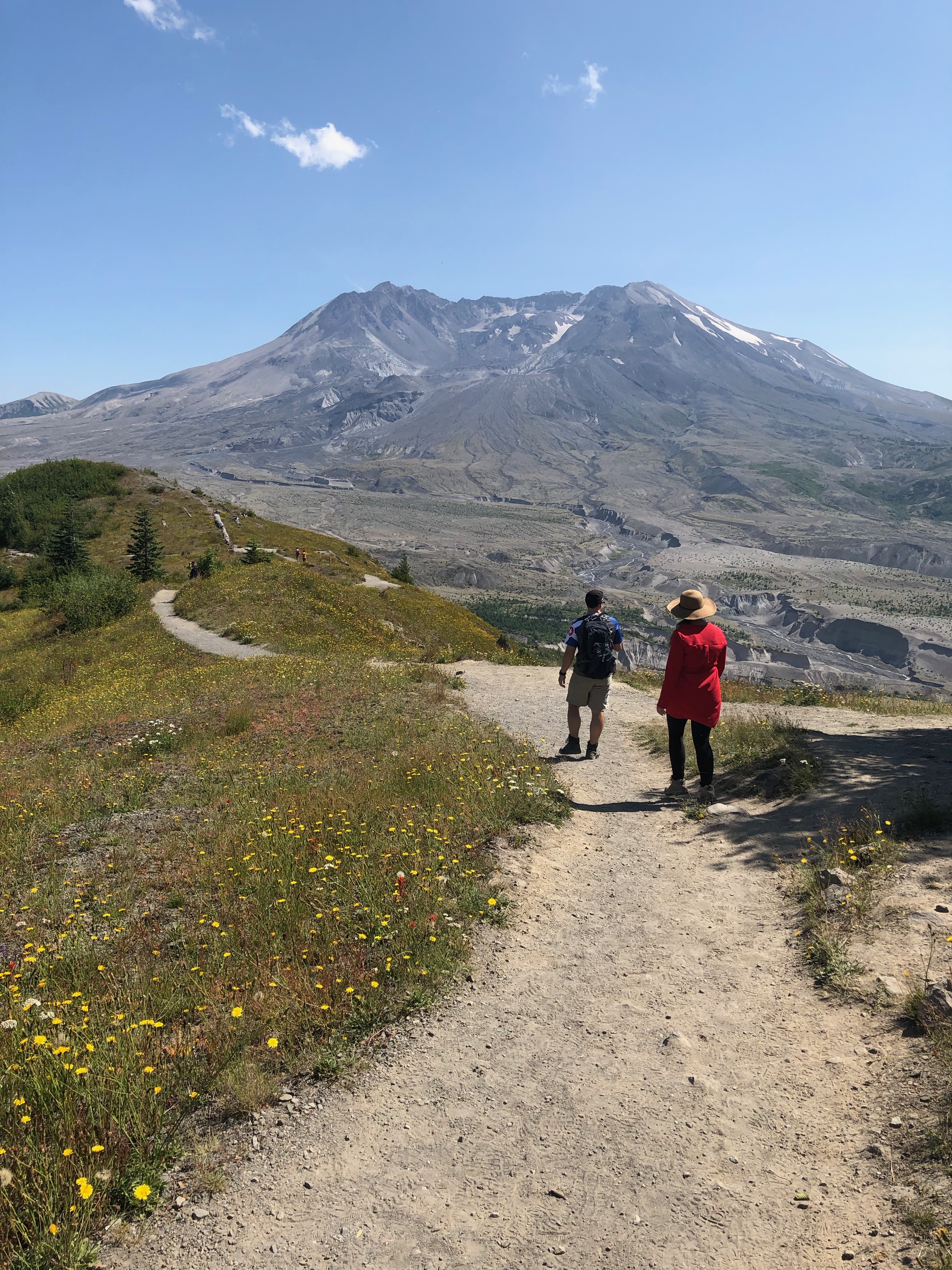 The landscape around Mount St. Helens is just packed with trails waiting to be explored.  I’m certain I just need to move up to Washington for six months so that I can get my boots on every single one!  My partners in crime and I had made it to the Johnston Ridge Observatory on the first leg of our trip.  Spying the Boundary Trail running right past the Observatory, it was only logical that we grab our bags and set out on a hike. A short 6-miler sounded like the perfect warmup for the summit attempt we would be making in two days.  All geared up, we struck out on the Boundary Trail east toward Harry’s Ridge.

Must-Haves For this Hike:
–  At least 2L of water + gatorade (or some sort of electrolytes)
–  Food (protein bar, apple, etc.)
–  Hiking shoes.  NO sandals – volcanic terrain will tear your feet up!
–  Hat and Sunscreen.  There is zero shade because all the trees were knocked flat in the 1980 blast.
–  Breathable clothes (no cotton) and layers that will keep you warm/dry in case of a weather change.
–  Toilet paper/shovel.  There are no facilities on the trail and you never know when nature will scream like a banshee.
–  Camera.  The views of Mount St. Helens are breathtaking from here, and you never know what you’ll discover on your hike, or how the volcano might show off.

The Boundary Trail actually begins several miles west of Johnston Ridge Observatory at the Hummocks Trailhead.  The trail then winds up Johnston Ridge, through Loowit Viewpoint and past the Observatory. It continues eastward to Harry’s Ridge (named after local resident Harry Truman who was killed in the 1980 eruption).  It then winds around the north side of Spirit Lake where it connects with several other trails.

From the Observatory’s outdoor observation deck, the trail immediately heads steeply uphill. Switchbacks cut into the hillside aide hikers in reaching the tallest point.  No sooner had we reached the top than a rockfall occurred at the lower left side of Mount St. Helens’ crater breach.  Dust and ash billowed into the air, catching in the wind and wisping up into the blue sky.  We discovered later that three small quakes had likely been the cause. The rockslide and quakes all showed up as very noticeable blips on the Observatory’s seismograph.

Once the dust had settled, we hustled down the opposite side of the hill.  Perhaps 1/8 mile down the trail, we came across a little cove set off to the side of the trail.  Here, a curved stone memorial stands engraved with the names of each of the 57 people who perished in the 1980 eruption.  Mount St. Helens stands watch five miles away.  We paused here, letting our fingers trace the names of each person.

The edge of Johnston Ridge sharply drops off to the right as you head down the Boundary Trail. The sides of the ridge are bare rock, scraped clean of any life.  It almost looks as if someone took an axe and scratched the sides of the ridge. Far below, the Pumice Plain between Johnston Ridge and Mount St. Helens is absolutely buried in volcanic material that has been worked and reworked by several eruptions after May 18, 1980. Chunks of the pre-1980 volcanic cone – known as hummocks – sit on the floor of the Pumice Plain. Explosion craters from steam that was trapped beneath the hot pyroclastic deposits dot the landscape. Water has carved canyons through the gray layers of pyroclastic deposits and ash.

Up high on the ridge, the trail on which we trod was cut through feet of ash and pyroclastic deposits.  The colors of the deposits changed beneath our feet due to their different mineral contents, different eruption dates, and different oxidation rates.  Lava bombs, some as large as cars, were strewn along the trail.

We passed sunbleached trees that had been ripped right from their stumps.  As we progressed eastward, the devastation seemed more extensive.  Thousands of trees covered the hillside, lying side by side like toothpicks.  They point to the north like compass needles, showing the south-to-north direction of the 1980 blast.  Those few trees that did remain standing are stripped of their branches and stand like ghostly memorials.

Despite the devastation, I was amazed at the life that had come back here.  Trees had started to take root again.  The forest was slowly starting to grow again, even if many of the trees were only knee high.  And the wildflowers!  Whites, golds, crimson and violet – I had never seen such a sea of color in my life.  Volcanoes are so well known for the destruction they can cause, but the creation that thrives in their wake is just incredible.

And 5 miles in the distance, Mount St. Helens rose, mighty and majestic, above the plain. Photographs don’t do her justice. The volcano is the biggest thing around, and absolutely demands one’s attention.  It was impossible to keep my eyes off of her sweeping slopes.

Two miles into the hike, we came to a split in the trail.  A smaller trail runs off toward the right, toward the edge of the ridge.  The four of us immediately went to check it out.  Mount St. Helens loomed to the right.  To the left was a view of Spirit Lake, its shores still clogged with dead, floating trees from the 1980 eruption.  Many of the trees that ended up in the lake had heavy ash caked around their roots and sank to the bottom, root ball first.  At the bottom of Spirit Lake stands a “forest” of dead trees from that eruption.

At this point, we had to make a decision.  Continue further along the trail?  Or head back the way we had come?  It was so tempting to keep hiking until our feet couldn’t take any more; we wanted to see absolutely everything!  But we didn’t want to exhaust ourselves before our summit hike.  The four of us agreed that one more mile wasn’t unreasonable.  Besides, I had spotted streaks of light tan colored deposits on the slopes of Harry’s Ridge that I wanted to investigate.

We stopped on a small, burgundy bridge just below Harry’s Ridge.  The bridge has clear views of Johnston Ridge all the way back to the Observatory, tucked into the hillside 3 miles away.  Between us, were thousands of trees and layers of pyroclastic deposits that 39 years of weathering had exposed.

I hiked over to explore the streaks of tan deposits on the hillside.  It was a deposite of reticulite – volcanic foam.  When still in the mantle or volcano’s magma chamber, this magma is very light and foamy.  Imagine the foam on a root beer float. When it’s erupted, it is incredibly light and has a texture similar to steel wool.

We also spotted a few round, marble sized pieces of what we believed were volcanic lapilli – or volcanic hail.  When finer pieces of ash and tephra are erupted high into the atmosphere, they mix with water and freeze, creating a dirty hailstone.  The lapilli then falls back to earth and solidifies into what looks like round, rocky marbles.

Pausing to have a snack and fending off daredevil chipmunks who wanted to share a bite, we made our way back toward the Johnston Ridge Observatory.  The shadows were lengthening as we arrived. The volcano looked stunning bathed in the golden light. Shadows dramatically cloaked the lava dome and crater. She looked even larger, if possible, than she had on our afternoon hike.  I paused on the abandoned observation deck to just watch the mountain.

The Johnston Ridge Observatory had closed for the night, and visitors who had once flooded the place had retreated to the city for a bite to eat.  The patio was abandoned except for us and three amazing new friends that we met.  One of my favorite things about being a volcano hopper is having the opportunity to meet people in all walks of life, who have so much knowledge, experience, and adventures of their own to share. I often gain amazing insights on the volcanoes I visit through the eyes of others who love the mountains just as much as I do.

As the sun crept toward the west, I watched the light dancing off of Mount St. Helens’ slopes. In two days, the four of us – my husband, brother, sister and I – would be climbing up the volcano’s back in hopes of reaching the summit.  It would be an entirely different perspective to be standing up there, looking down at the Observatory where I was now standing.

Piling into the Jeep and heading back up the Spirit Lake Memorial Highway, we stopped again at the Forest Learning Center.  The skies and mountains had turned pink with the setting sun, and Mount St. Helens glowed brighter than anything in the surrounding landscape.  I ached at the thought of leaving, not wanting to let the sun set on the amazing adventure we’d had that day.  But our hike had left us hungry, and we had a long drive back to our base camp. We left that night exhilarated and more excited than ever about the summit hike. Little did we know an adventure unlike anything we ever expected was waiting for us.