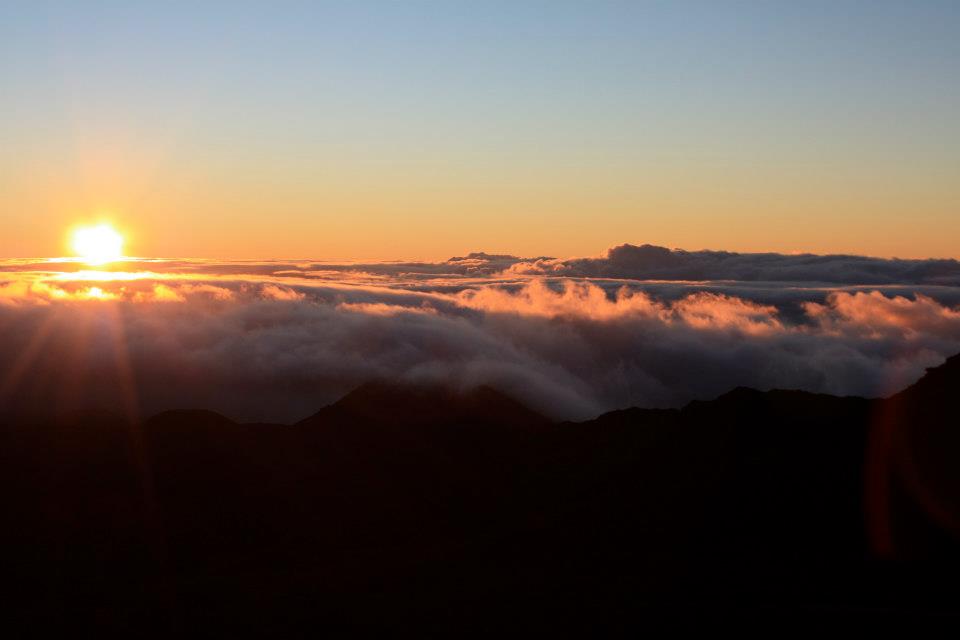 The night is as black as pitch as we tiptoe out of our condo and start the car. Stars glitter in the darkness overhead and the arm of the Milky Way stretches from one side of the island of Maui to the other. The silhouette of Haleakala volcano, a shadow in the night, towers 10,000 feet above us.

We navigate through towns that are dark and still at two in the morning. Catching Route 378, we begin the slow drive up the side of the volcano. A cow, roaming free, appears in the headlights and then vanishes just as quickly. A pu’eo swoops down and snatches something off of the highway and flies away into the dark. The narrow beam of our headlights gives us hints at our surroundings, but we can see nothing.

The road winds and climbs for miles. Near the summit of the volcano, the road became series of steep switchbacks. The drive ends at the summit parking lot. Small telescopes and weather stations, surrounded by white domes, sat off to one side. A rock wall and sheltered viewing area sit on the far side of the summit lot. We tumbled out of the car and breathed in the fresh mountain air.

That mountain air was freezing! The weather had been a cozy 72 degrees in Kihei, but this high in elevation, the temperatures had dropped into the 30’s. We had planned ahead and brought coats, hats, and gloves with us. But with the wet cold that had started seeping into our bones, I was already wishing that we had stripped the comforter off of the bed and brought it with us.

We bundled up and joined a growing crowd of people at the rock wall. Two spots on the wall itself were available and we chose those for seats. All of our neighbors and us got to know each other really well as we huddled together to keep warm. The night was still dark and the stars up here were more bright and clear than we had ever seen before. They were as clear as if we were orbiting in space. The moon and Jupiter hung like jewels in the sky. A meteor blazed a bright green trail through the darkness. On the horizon, a soft glow was beginning to form. Sunrise was coming.

The House of the Sun

Haleakala is one of two volcanoes that makes up the island of Maui. It towers 10,023 feet above sea level and makes up over 75% of Maui’s land. Haleakala is one of six active volcanoes in the state of Hawaii, and is the only active volcano on Maui. The volcano’s last eruption is believed to have taken place around the year 1790 near La Perouse Point.

Haleakala, like all of the other volcanoes in the Hawaiian Islands, is a shield volcano. These volcanoes are predominantly made of basalt, though other more explosive lavas such as dacite and rhyolite can be present. Basalt is typically more fluid and runny when it flows, which creates more effusive eruptions that give the volcano it’s shield-like shape.

A variety of landscapes cover the volcano. Thick rainforests and hundreds of waterfalls cover the eastern slopes. The south and eastern sides are much dryer and more desert-like in places. The inside of the crater is full of volcanic cones and features, and is home to the silversword, a plant that grows only in Maui.

The name Haleakala in Hawaiian literally means “House of the Sun.” The volcano’s summit crater has eroded and collapsed over the millenia, which has left a crater that is 7 miles long, 2 miles wide, and 8 miles deep. This crater opens to the east and hosts the sunrise every morning. Visitors from all over the world visit the summit to watch the sun rise over the colorful crater. And on that chilly morning, we were among them.

As the glow in the east began to grow brighter, the wind began to stir. As the heat from the coming sunrise began to warm the Pacific and the Hawaiian Islands, the convection in the air grew stronger. On the island below us, we could make out the sparkling lights of the towns as their inhabitants began to wake. To the south and west, the forms of other islands – Kaho’olawe, Lanai, and Molokai – had begun to appear. And 80 miles to the east, standing out in tones of blue and purple against the gold sunrise, Mauna Loa and Mauna Kea towered above Big Island.

The crater of Halekala was filled with clouds that morning, that hid the volcano’s secrets below. A number of volcanic cones and features stretched beneath those clouds, just waiting for us to explore them. As the sun burst over the eastern horizon, it filled the crater with color and golden light. The sunshine washed over us and the sun began its climb into a perfect blue sky.

The peace and beauty of that sunrise was something I will never forget. There is something to be said about sitting with a volcano for awhile and just being still. I find those intimate moments with volcanoes so fulfilling and restorative.

We admired the views and ate some breakfast as we recharged for our next adventure: a descent into Haleakala’s summit crater.

Facebook0Tweet0Pin0
Previous articleWhat Is The Most Scared You've Ever Been?

Next article Haleakala On Horseback