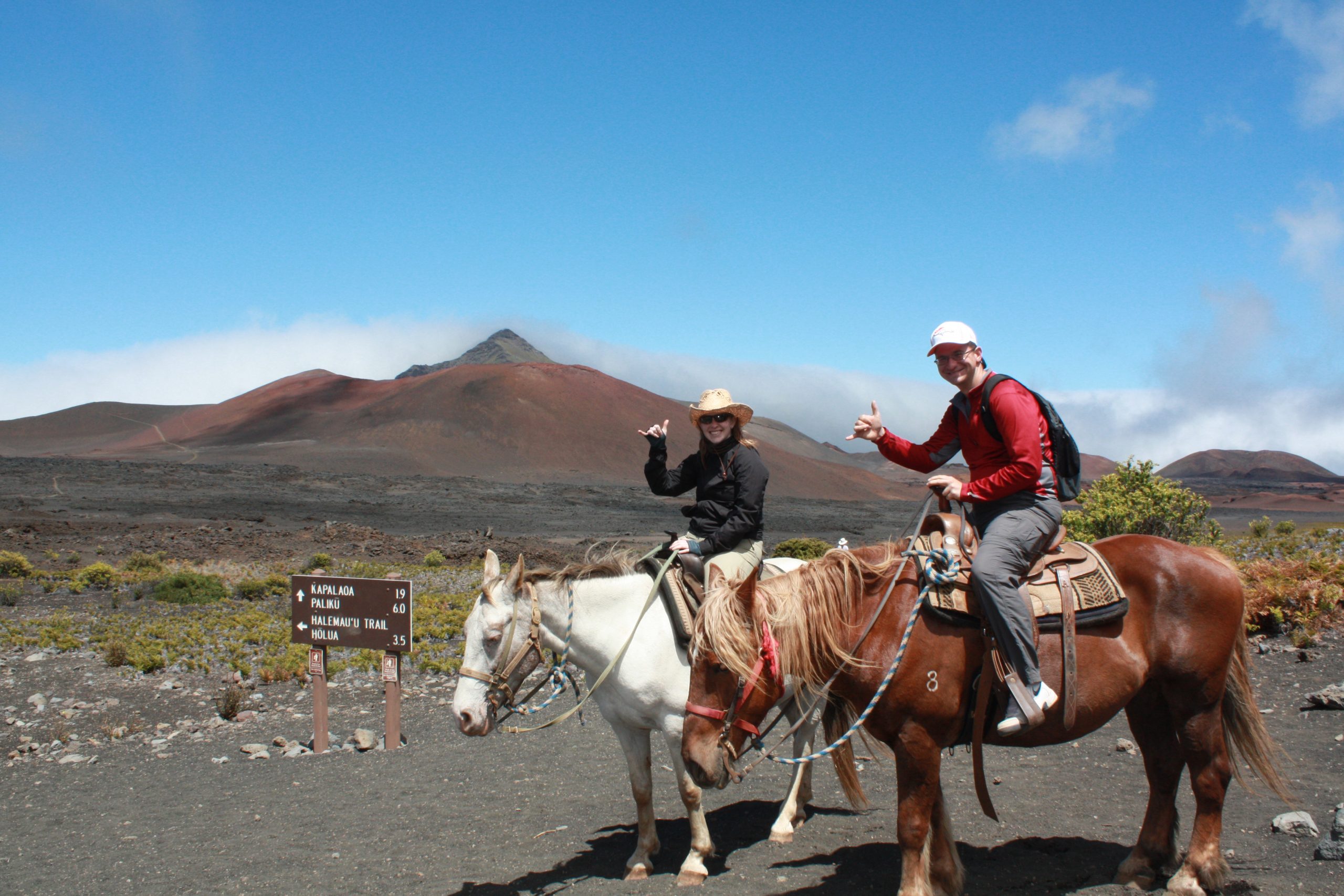 There is something inspiring about a sunrise. The golden rays herald in a new day full of hopes and adventures. No two sunrises are ever the same. Watching the golden sunrise over Haleakala’s expansive crater was a sight unlike any other. As the sun rose higher into the eastern sky and began to burn off the clouds that had settled in the crater, the spirit of adventure set in and we were anxious to explore more of Maui’s biggest volcano: Haleakala.

The House of the Sun

Haleakala is one of two volcanoes that make up the island of Maui, Hawaii. It towers 10,023’ above sea level and makes up over 75% of Maui’s land. Haleakala is one of six active volcanoes in the state of Hawaii, and is the only active volcano on Maui. The volcano’s last eruption is believed to have taken place around the year 1790 near La Perouse Point on the southern side of the island.

Haleakala, like all other volcanoes in the Hawaiian Islands, is a shield volcano. These volcanoes are predominantly made of basalt, though other more explosive lavas such as dacite and rhyolite can sometimes be present. Basalt is typically more fluid—like honey—when it flows, which creates more effusive eruptions. This gives the volcano its shield-like shape.

A variety of landscapes cover the volcano. Thick rainforests and hundreds of waterfalls cover the eastern slopes. The south and eastern sides are much dryer and more desert-like in places. The inside of the crater is full of volcanic cones and features.

The name Haleakala in Hawaiian literally means “House of the Sun.” The volcano’s summit crater has eroded and collapsed over the millennia, which has left a crater that is 7 miles long, 2 miles wide, and 8 miles deep. The crater opens to the east and hosts the sunrise every morning. Visitors from all over the world visit the summit to watch the sun rise over the colorful crater.

We had joined a hundred other people in watching the golden sun climb into the sky that chilly morning, but we were ready to learn more about Haleakala. And we were going to do it by horseback.

The year we visited Maui had been a difficult one for us. I had encountered unprecedented health challenges that had all but taken away my ability to hike. After three surgeries in four months, I was struggling to keep a positive outlook. My partner in crime did something amazing—he booked that trip to Maui. And he was determined to find a way for me to explore Haleakala volcano. His solution? Horseback.

After having some breakfast at the summit (there are no restaurants, so bring your own picnic) and taking a catnap, we met up with our guide. The company we used has horses that are trained to navigate Haleakala’s steep trails to the bottom of the crater.

A white mare named Lucy made my acquaintance as we prepared for the trip. My partner in crime was introduced to a chestnut horse named Chuck. He would later earn the nickname “Chuck the Truck” for the way he drove steadily forward. With everyone saddled and a picnic lunch pack, we started out from the Haleakala visitor center down the Sliding Sands Trail.

The Sliding Sands Trail begins slowly descending into the crater of Haleakala volcano and soon becomes a steep trek down. The trail winds along the crater wall and switchbacks help along the descent. But this trail isn’t for the faint of heart. It can be hiked also. Weather conditions at this elevation can change quickly and there is no shade in this volcanic wilderness. If you venture down this trail, be sure you have more than enough water, food, sun protection, and weather protection.

That being said, this trail was epic. The thick layer of clouds that had settled in the heart of the crater for sunrise were burning off. Out of the mist, a volcanic vent or a cinder cone would suddenly appear. The lava flows inside the crater are older than the volcanoes on Big Island, and each are in different stages of oxidation. This painted the inside of Haleakala with brilliant streaks of coppery red, yellow, brown, and black. It looked like God had gone wild with His paintbrush.

As the horses marched and neighed their way along the narrow trail, our guide pointed out a plant called silversword, or ‘ahinahina. Silversword grows out from a bowling ball sized bulb and has spiky leaves with fine hair-like strands that shimmer silver. As it grows, it creates a tower of buds that will flower only once in the plant’s life. Once it flowers, the silversword dies and spreads its seeds. Beautiful pink flowers adorned some of these plants as we passed. Silversword is an extremely rare plant. Haleakala is the only place on Earth where it grows.

The Bottom of Haleakala’s Crater

After descending 2,795’ over 4 miles into the crater, we reached the bottom of the trail. The crater opens up and is so wide that it almost appeared that we were standing in the middle of a flat plain. It was dry and dusty at the bottom. Red dust from eroded lava swirled up into the air when the wind gusted. Cinder cones dotted the horizon. The trail continues further out and camping options are available deeper in the volcanic wilderness. As much as I wanted to explore more, this was the end of our journey. We stopped and had a picnic lunch with the other riders—one that we had to share with the wasps that were eager for a bite of our sandwiches.

Then, it was time to head back up to the summit. The trail doesn’t look so hard going down, but going back up it is certainly a difficult climb. Given my limited abilities at the time, I was grateful to be on the back of a horse that handled it like it was a walk in the park. The only disadvantage to being on horseback was the inability to stop and examine the lava along the trail, or pause to study the landscape. There was a lot of time spent encouraging Lucy up or down the hill, and making sure that she hadn’t wandered off trail.

Haleakala is a stunning volcano. Exploring a part of the crater on horseback was a real blessing. I hope to return one day, now that my body is in much better condition and the surgeries are behind me, and explore it in more detail on foot. There are many more trails to hike; more features to explore.

Next article Florissant Fossil Beds: A Window to the Past