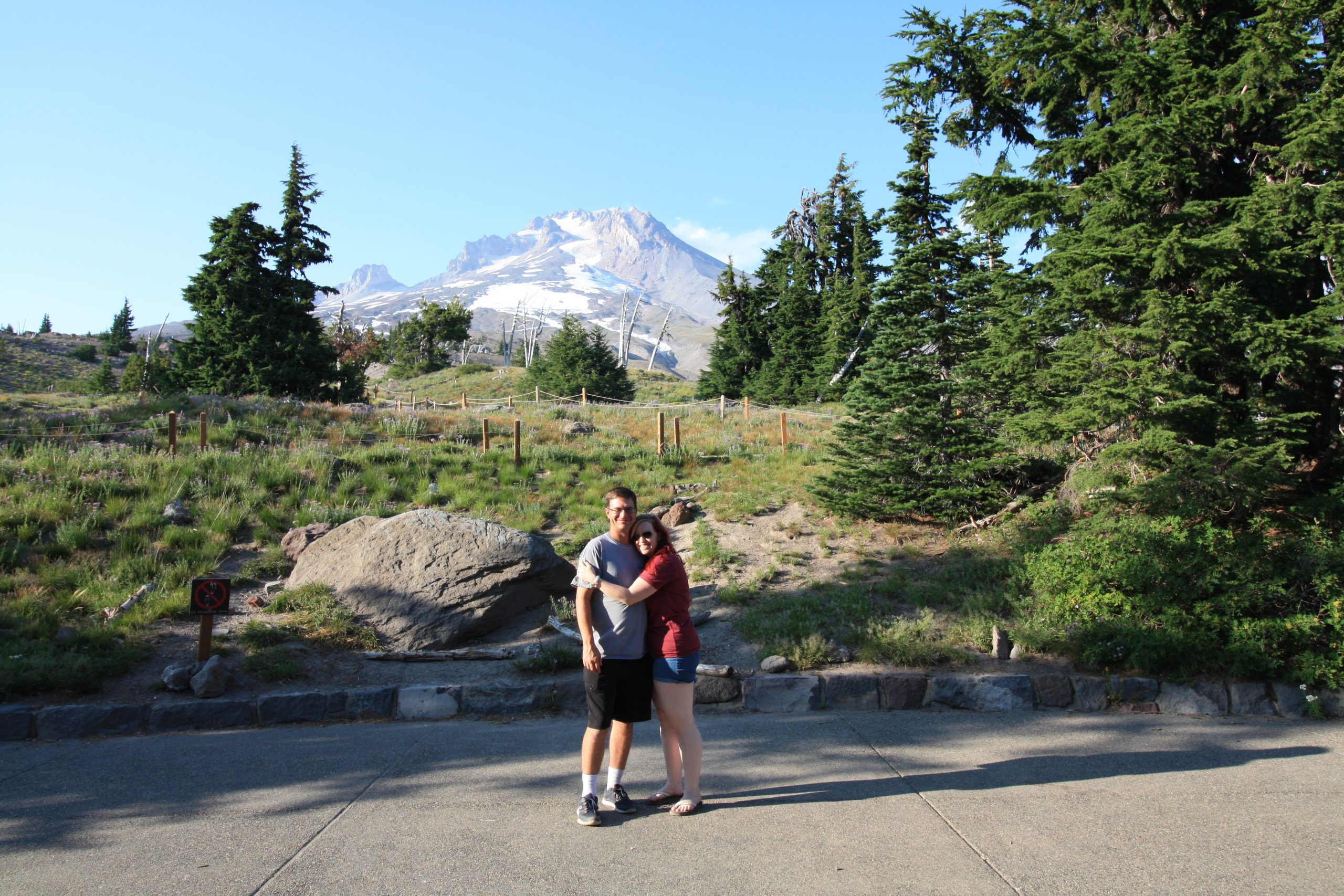 Wy’east has a secret. He loves the sunrise.

Before the sun even rose, I felt the stirring.  I lifted my head from the soft pillow and looked out the window.  Outside of our log cabin at the base of Mount Hood, the sky was turning purple behind the thick cluster of trees. Streaks of pink began to tint the clouds, then orange strands began to glow.  But there was something else in the air that morning that I’d never quite felt before during a sunrise.  It was like the quivering excitement you felt as a kid on Christmas morning. It grows and grows until you burst from your bed and race downstairs to see the presents under the tree.

I snuggled under the thick down comforter as I watched the sunrise.  The excitement thickened in the air like static electricity. Jason was fast asleep next to me. And I hadn’t heard a peep from downstairs.  Even the birds had barely begun to chirp.  The only one up was the volcano.

As the golden sun exploded over the horizon, bathing Mount Hood and the surrounding landscape in light, the sensation reached its peak.  It felt as if Mount Hood had flung its arms open wide and heaved a large, “Ahhh!”

The sensation was so strong that Jason woke, rolled over and looked at me with wide eyes.  “What was that?”  We experienced the exact same sensation on the volcano that morning, and every morning thereafter.

I’m sure the feeling would have been easy to ignore.  Most of the time we’re so obsessed with trying to catch five more minutes of zzz’s and skidding into work on time that we’re oblivious to the little things. If we take the time to stop, to breathe, and to listen, we might capture a glimpse of the miraculous.

Mount Hood is a composite volcano that sits directly east of Portland, Oregon and towers 11,250’ above the surrounding area.  Since Portland itself sits at an elevation of only 50’ above sea level, when the volcano makes an appearance from behind the clouds, viewers are treated to a spectacular view of his pointed peak.

Composite volcanoes tend to be very large, and very explosive.  Their cones are usually made up of andesite, rhyolite, and dacite – sticky lavas that cling together and build up into a conical shape over repeated eruptions.  Scorching pyroclastic density currents are not uncommon, and the explosive eruptions that this type of volcano typically produces can be dangerous to bystanders.

But not all composite volcanoes are created equal and each has their own personality.  Mount St. Helens is all about the explosions and the pyroclastic density currents that she hurls down her slopes. Mount Hood?  He’s no stranger to pyroclastic flows either, but he has added a number of massive lava flows to his arsenal.  These lava flows radiate out from the volcano in all directions and have built up the bulk of the volcano’s cone.

Wy’east – the First People’s name for the volcano – has had four major eruption periods in the last few thousand years.  The most recent large eruptions took place approximately 1,500 and 230 years ago.  In fact, just a few years before Lewis and Clark reached the Pacific Northwest in 1805, Mount Hood erupted with pyroclastic density currents, lava flows, and ash clouds. The extreme heat from the eruption melted all of the snow, causing massive lahars to clog the rivers. When the Lewis and Clark expedition came through the area, they saw the aftermath of this eruption.  Not realizing what had so clogged the river with sediment, they named one river “Quicksand River.”  Today, that same river is known as the Sandy River. It runs fresh and clean, and is chilly as ice when you dip your toes in it.

The current lava dome, called Crater Rock, was also formed in the 1790’s eruption by sticky lava piling on top of itself as it was pushed out of the volcano’s vent.  It sits exposed on the southwest side of the volcano’s crater, like the crown jewel on the volcano’s head.

Mount Hood has erupted several times since 1790, and the latest eruption was in 1907.  Since then, the volcano has been relatively quiet.  Fumaroles dot the crater and gush hot steam and volcanic gases.  Earthquakes tremble beneath the volcano and rumble along its fault lines.  Wy’east has been biding his time and enjoying the sunrises ever since.  And I have no doubt he’s plotting his next show because, just like Mount St. Helens, it’s not a matter of if he will erupt again, but when.

When Mount Hood does erupt, there are significant volcanic hazards for the surrounding towns on its slopes and downstream. While pyroclastic density currents and lava flows could be dangerous and destructive for towns and infrastructure on the volcano itself, lahars and ash pose the greatest risks for cities like Portland. Monitoring is still rather limited, despite our advances in technology, but make no mistake, volcanologists are keeping a close eye on the volcano.

Boots on the Ground

After tumbling into our beds at nearly four in the morning after our Mount St. Helens summit hike, you’d think I would have slept straight through sunrise.  Mount Hood wasn’t having it.  He may as well have been a kid shaking me and exclaiming, “Get up and enjoy the day!”  Completely spent from our hike, I rolled over and buried my face in the pillow.  I didn’t roll out of bed until at least noon.

We climbed into our cozy cabin’s hot tub, and let the bubbling water soothe away our aches and pains from summiting a stratovolcano the day before.  Tired as we were, we were elated we had accomplished such a feat, especially given the circumstances that nearly stopped us. Once we’d had some lunch and felt slightly more awake, the itch to go exploring overtook us.  Hiking was off limits, so where could we go that required little effort?  Mount Hood!

We piled into the Jeep and drove east on Highway 26.  The volcano was invisible behind the thick evergreen forest and undulating hills.  Then, coming around the bend near Government Camp, there he was!  Wy’east in all his glory.  Vibrant swaths of white snow streaked down his gray slopes. Permanent glaciers sit nestled in the crater.  As we pulled off the highway and headed up the winding road toward the lodge, we passed sparkling waterfalls and explosions of wildflowers.  Wy’east is a beautiful volcano and you kind of get the feeling that he knows it.

Timberline Lodge sits nestled on Mount Hood’s southern slope at the 6,000’ mark.  Built in 1937 as a ski resort, the lodge was declared a National Historic Landmark in 1977.  Mount Hood is the only ski area in North America that is open year-round, and it was strange to see enthusiasts walking by with skis or snowboards over their shoulders.  In the summer, visitors can enjoy the Magic Mile ski lift.  The lift boasts amazing views of the volcano and surrounding area, and rises to 7,000’ feet, dropping visitors off below the lava dome.  We had wanted to ride up to that elevation and explore but the lifts had just closed for the afternoon and a ski lift probably wasn’t the smartest place for a girl who had just had a seizure a couple days before.  Just saying.

Instead of riding the lift, we opted to explore the hiking trails near the lodge.  The alpine area was strewn with old pyroclasts, ash, and different types of lava.  The difference between them could be spotted in the varying colors from light to dark gray, and various stages of oxidation could be spotted in the rock. Enormous boulders lay scattered here and there along the trail.  I could hardly fathom the force it must have taken to hurl them to their final resting spots so far downslope.

We spied a row of wood adirondak chairs on the lodge’s back patio and decided they looked cozy. Relaxing into the chair, I had a perfect view of Mount Hood’s cone, crater, and lava dome.

Mount Hood’s crater currently sits tilted to the south slightly.  The steep, jagged slopes look very similar to the inside of Mount St. Helens’ crater.  Various lavas and pyroclastic materials paint the volcano in shades of gray, and oxidation streaks the crater with reds and oranges.  Sulfur finishes the masterpiece with splashes of gold.  White glaciers wrap around the lava dome; rockfalls up at the summit skittered over the dusty snow to reveal glistening white underneath.  Soft curls of steam rise from the hot fumaroles around Crater Rock’s base.  It is a breathtaking sight.

It was so peaceful that, for a moment, I almost forgot I was sitting on the slopes of a very active volcano.  Wy’east may be resting, but he is not asleep.  As I relaxed in the adirondak chair, a tiny earthquake rolled by underneath me.  It was too small for me to really feel; small enough for me to mistake as a heartbeat.  But the windows in the lodge behind me rattled and dust fell from the sills.  Another rockfall tore up snow on the slopes.

It was just a gentle reminder that Mount Hood is still awake.