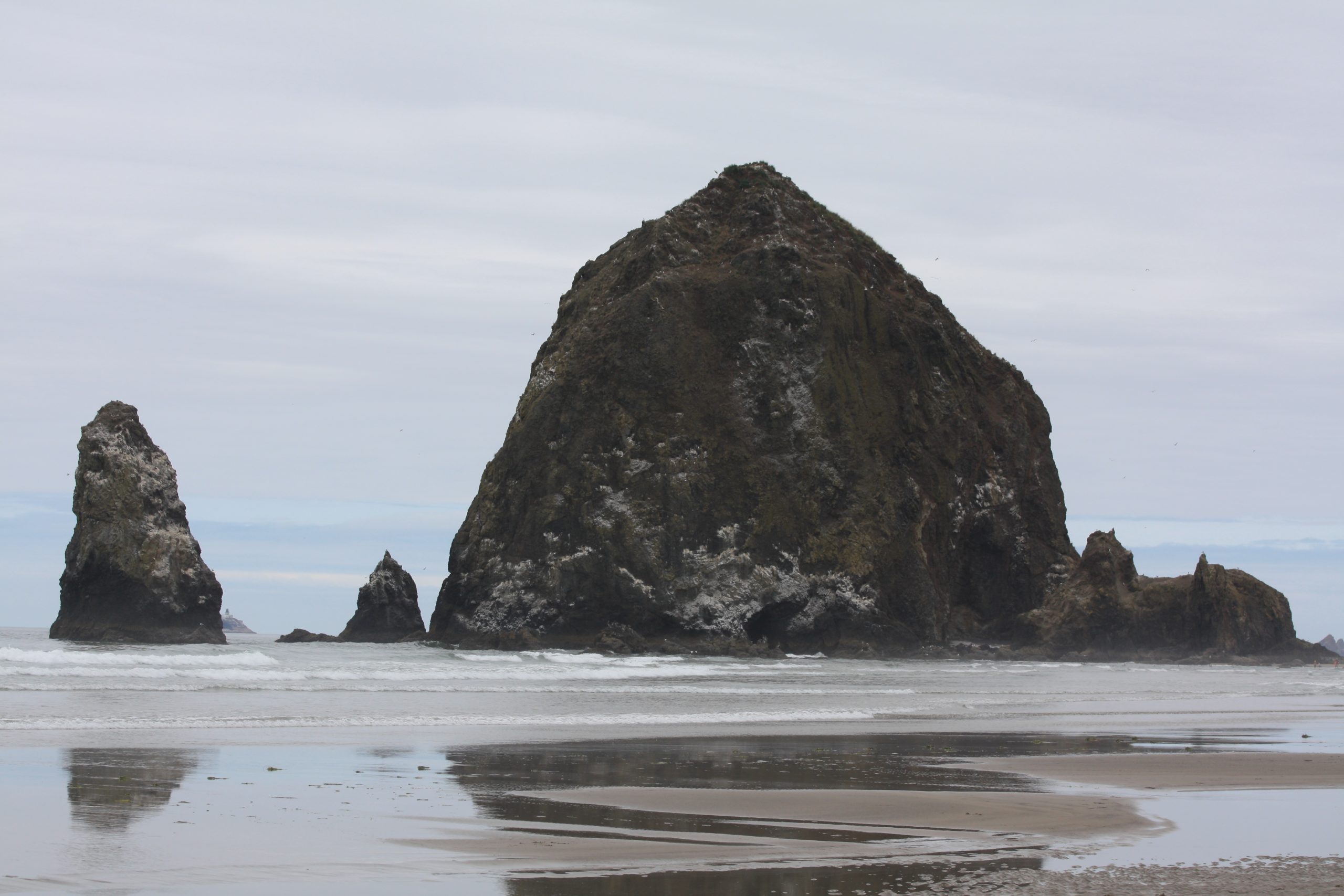 The Pacific Ocean is absolutely magical.  One never knows what they’ll discover on its shores or in its rich blue depths.  There is something about the steady crash of the waves against the shore that relaxes and envigorates the soul.  Our Base Camp is nowhere near the ocean, or any significant source of water, so we made tracks for the beach while we were in Oregon this summer.  We didn’t choose just any beach, however. We chose Cannon Beach, Oregon for sentimental reasons and ended up finding a volcanic treasure: Haystack Rock.

Hopping into the Jeep, we headed west from Portland along Highway 26 until we could smell salt in the air.  Catching Highway 101 – the Oregon Coast Highway – we drove south through rolling hills and dense forest until we landed in the tiny seaside town of Cannon Beach.  With a population of less than 2,000 people, the town’s houses, hotels, and shops are all clustered together along the cliffs and steep hills of the coastline.

Cannon Beach was named after a cannon that washed up on shore many years ago after a ship wrecked off the coast.  Today, gift shops and art galleries line the main drag, along with some of the best saltwater taffy shops in the world.  There are also a few fantastic breweries in town that serve seafood fresh out of the ocean and offer unique local brews on tap.

We love to try new food and unique eats, so the first place we stopped was Pelican Brewing Company.  All four of us ordered a bowl of steaming cioppino – a seafood stew that was fresh out of the ocean that morning and packed full of crab, clams, shrimp, scallops, squid, mussels, and fish.  It was so delicious that it was tempting to lick the bowl. Another local treat that we discovered was a pint of Rogue’s Hazelnut Brown Nectar.  Oregon is the hazelnut capital of the United States, and it was a treat to find a local twist on a traditional brown ale.

Bellies full, we drove along S. Hemlock Street as it winds along the coast.  A couple miles down, we spied Tolovana State Park.  This park, nestled just south of Haystack Rock, is complete with plenty of parking spaces, showers, a picnic area, and bathrooms.  And there are bunnies everywhere!

Cannon Beach is known for their bunnies.  Local legend states that someone once released their pet rabbits into the wild.  Instead of falling victim to predators or not being able to find food, the bunnies thrived and reproduced.  Now the town is filled with rabbits that freely hop around town, sometimes even down to the sand.  We passed black, white, and brown bunnies grazing as we trekked down the stairs to the beach.

Kicking our shoes off, we ran our toes through the sand.  The dry sand further from the waves was coarse and fluffy; closer to the water it became hard and packed, which made it easier to walk.  The strip of brown sand ran for several miles along the coast.  Clear jellyfish had washed up on shore and were almost invisible in the sand until we were nearly stepping on them.  Small crabs skittered over the sand and into their holes. Seagulls and other sea birds dove down, trying to catch a snack.  Seaweed was strewn over the sand, and each set of waves that came in tugged chunks of it back out to sea.

The ocean’s water was icy cold as it swirled around our ankles. It was too chilly to be tempt us to swim, and the amount of jellyfish in the water made it even less appealing. Sticking to the shore, we watched our step and investigated green sea glass, rainbows of abalone shells, and polished black basalt stones.  There was only one place much of that basalt could have originated, and that was the black pyramid of Haystack Rock a mile to our north.

After a mile long hike through the surf and sand, we reached Haystack Rock.  The enormous black rock juts 235 feet (71.6 m) straight out of the sea, with smaller spires called The Needles surrounding its south flank.  The rock has the pyramidal shape of a haystack, hence its name. The tide was at its lowest, which allowed us to walk out through the shallow, frigid water toward the rock.  Barnicles and colorful sea stars rested at the bottom of crystal clear tide pools near the rock’s base.  Seagulls, pelicans, and puffins nested all over Haystack Rock itself, squawking and flapping their wings.  The place was a haven for marine and bird life.  But what had created Haystack Rock in the first place?

Walking right up to Haystack Rock’s base, we were able to examine the black basalt, which suggests some manner of volcanic activity. It’s no secret that Oregon, Washington, and the Cascades are extremely active, and we had already explored some of that volcanism at Mount St. Helens and Mount Hood earlier on our visit. Plate tectonics in the area provide a constant fuel source for the volcanism in the area as the Juan de Fuca plate subducts under the North American plate.  The Pacific Northwest’s stratovolcanoes are not the only show in town, however.  The area is packed full of volcanic fields, vents, and miles upon miles of lava flows to explore.

Scientists believe that the Pacific Northwest is generally less active today than it has been in the past.  To add to the activity spurred on by plate tectonics, the Yellowstone hotspot also had a role in Oregon’s volcanic history.  The hot spot that currently fuels Yellowstone’s volcano used to sit much further to the west and has moved eastward over time. (If you look at a satellite image, you can actually see the path the Yellowstone volcano has carved through the landscape on its journey).  It is believed that the Yellowstone hot spot is responsible for creating a massive basalt lava flow called the Ginkgo Flow.  The eruption ejected so much lava that the flow reached the Pacific Ocean in a matter of days.

A Battle of Fire and Water

The classic battle of fire and water ensued.  The ocean water began to cool the lava flows, creating a solid crust around the outside of the lava.  While the crust may be cooled and hardened, it takes some time for the molten lava beneath to completely cool and solidify.  If that molten lava happens to encounter water, the results can be explosive.

It is believed that the lava from the Ginkgo Flow interacted with the ocean water in this way.  Explosions from lava interacting with water re-opened solidified pieces of the lava flow, causing lava to re-erupt from the freshly torn hole.  These new vents opened underwater, creating small submarine volcanoes.  When all of the lava finally cooled, these submarine volcanoes became extinct.

As the Juan de Fuca plate continues to subduct under the North American plate, it pushes the plate upward.  Imagine sliding your hand under a blanket.  The mass of your hand will lift the blanket upward and buckle it slightly.  Eventually, the sea floor where all of these submarine volcanoes had previously erupted were pushed up and above the surface of the ocean’s waves.  Wind and water have eroded the volcanoes’ slopes away over time, leaving only the throat of the volcano remaining.

Haystack Rock is one of the remaining volcanic vents.

When we planned our trip to Haystack Rock, I hadn’t done much research into its history (so imagine my delight later when I learned more).  Our trip to Cannon Beach and Haystack Rock wasn’t just to splash in the ocean, relax on the beach,  or to indulge in wickedly fresh seafood.  It wasn’t even to explore another volcanic feature (though Jason swears I have an uncanny knack for finding them, even when we’re not looking).  There was another, more personal, reason we chose to visit that particular shore.

My grandfather grew up during the famous Dust Bowl in Oklahoma in the 1930’s.  Unable to maintain the family’s way of life, his parents moved themselves and their three children to Seaside, Oregon.  Seaside sits just north of Cannon Beach, on the other side of Ecola State Park.  My grandfather grew up on this stretch of coast and spent most of his youth here.  He eventually joined the Air Force, met my grandmother, and moved across the country to live closer to her sister.

When I was three years old, my grandparents took my mother and I on a cross-country adventure back to these shores where he had grown up. Of course, I remember very little from the trip except for a scary lightning storm in Colorado, sitting in my great-grandmother’s kitchen, and the view of Haystack Rock.

On this trip, my mother took a picture of Haystack Rock and the Oregon Coast.  She had the photograph enlarged and it has been hanging in her house for over 30 years.  Mom didn’t remember where she had taken the picture, or even if it was Haystack Rock in the photo.  So, naturally, my brother and I were hell bent on finding the exact spot from where the picture had been taken.

The Search for the Perfect View

I was positive that it was Haystack Rock in the photograph, and knew where my grandfather had grown up.  It took a little searching and scouting, but we quickly realized that the overlook was inside Ecola State Park.  We came across a grassy knoll that looked south toward Cannon Beach and Haystack Rock, and westward over the silvery Pacific Ocean.  We found the exact picnic table where my grandparents, mom, and I had once lunched and took a picture of the view.  I texted it back to our mom and she wrote back, “Hey!  That’s the picture on my wall!”  We then proceeded to take photos of ourselves in the picture and sent them to her.  Happy memories came flooding back.

I blame Mom and my grandparents for introducing me to my first volcano all those years ago. Even if they had no idea Haystack Rock was the remains of one, that visit plus the views of Mount Hood and Mount Jefferson certainly must have had an impression on my young heart.

Next article 5 Reasons to be Thankful for Volcanoes