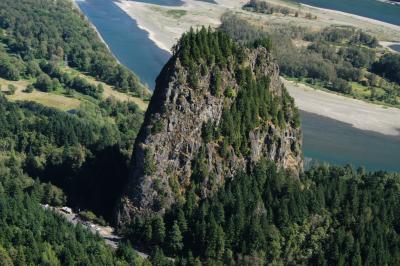 Heading eastbound out of Portland, your eyes will either be fixed on traffic or on magnificent Mount Hood.  Standing at 11,250’ above sea level, the stratovolcano certainly dominates the landscape.  If you’re kicking back in the passenger seat, you’ll notice the enormous hills that just out of the landscape like molehills.

As you turn up Highway 26 toward Mount Hood, you’ll soon find yourself driving through the tiny town of Boring, Oregon.

My brother and I were no strangers to road trips growing up.  Driving through Boring offered us the perfect opportunity for a blast from the past and we erupted into shouts of, “This is the most Boring town ever,” “Are we there yet?” and “I’m not touching you!”  We punched each other in the arm and then stuck out heads out of the Jeep’s windows to study the area.

12 miles outside of Portland, the town of Boring is nestled between hundreds of hills.  Houses and thick forests curl up the sides of these mini-mountains and are tucked between them.  Most of these conical hills rise 650’ – 1,000’ feet in height. The tallest hill in the area is Larch Mountain, 20 miles east and sitting at 4,055’.  What do all these hills have in common?  Each one of them is a volcano!

The area around Boring, Oregon is the Boring Volcanic Field.  Where did it get such an unexciting name in the first place?  Was it so exciting that, like the Vikings, settlers named it the opposite of what they discovered (like they did with Greenland and Iceland)?  Not quite.  The volcanic field was conveniently named after the town of Boring, which sits at its heart.  The town of Boring itself was named after Union soldier William Harrison Boring. He settled this part of the Oregon Territory in the mid-1800’s.

The Boring Volcanic Field stretches 1,500 square miles around the town. It sits just west of the Cascade Arc where the stratovolcanoes reside.  The field has over 80 individual volcanic vents, some of which are still being discovered.  Flood events such as the Missoula Floods have buried many of the vents beneath layers of sediment. New volcanic eruptions have covered older ones.  Volcanologists believe that each vent was formed from a single eruption.

The Volcanoes of the Boring Volcanic Field

These vents are now considered extinct, but this volcanic Field is not.  New eruptive material is constantly being formed by the active subduction of the Juan de Fuca plate beneath the North American plate, . This is what fuels the stratovolcanoes like Mount Hood and Mount St. Helens.  There’s no reason to believe that it couldn’t fuel another eruption here in the Boring Volcanic Field as well.

Most of the volcanoes in the Boring Volcanic Field are small shield volcanoes like Mauna Loa in Hawaii.  They are created from basalt: a more runny and typically less explosive lava. This runny lava gives the shield volcanoes a domed shape, as if a Spartan warrior had set his shield on the ground.  Some of the basalt lava in the field also has andesite mixed in, which gives it an explosive element. Other volcanoes in the field are cinder cones, comprised of basalt and andesite lavas.

A Connection to Mount Hood?

Volcanologists previously believed that the volcanic activity in the Boring Volcanic Field was tied to Mount Hood’s activity.  After all, Mauna Loa in Hawaii has 100’s of cinder cones dotting her slopes. So why should Mount Hood be any different?  However, scientists discovered that the Boring Volcanic field has its own plumbing system. The system isn’t tied to Mount Hood’s.  The volcanic field has its own magma source, and it’s own pipeline to the mantle, which makes it a unique and individual area to study.

While not currently active, the Boring Volcanic Field certainly has an exciting and interesting past.  Scientists are continuing to study the area. They are constantly unearthing new discoveries about the field and the volcanoes that form it.  I am excited to hear the latest discoveries as they uncover them. So, as you drive through Boring, Oregon, enjoy the scenery.  Having an idea of the rich volcanic history here, and the potential for future activity, will make the drive much more exciting!