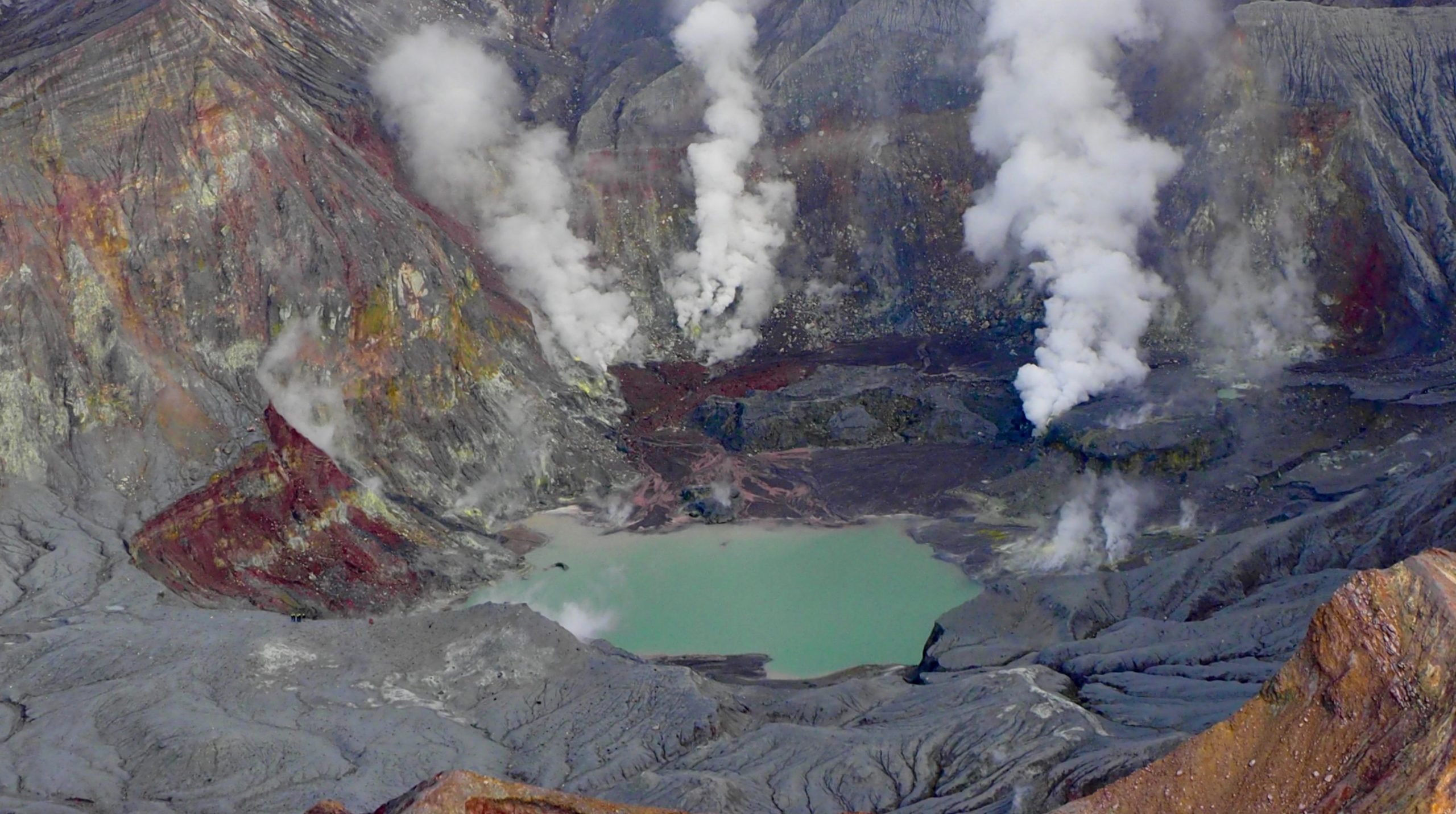 It was a warm and beautiful December morning. The South Pacific’s waves reflected the vibrant blue sky and lapped steadily at the sides of the tour boats. The boats, operated by a handful of tour companies, skimmed across the Bay of Plenty on New Zealand’s north shore. 30 miles (48 km) offshore sat the steaming, rumbling stratovolcano known as Whakaari.

The tours to the volcano were on time, the boats fueled, snacks provided. People packed onto the boats for their expedition to the active volcano. The visitors’ shoes crunched against the gray ash and tephra as they hiked through the volcano’s water-filled crater. Steam curled up from steep crater walls streaked white and yellow from sulfur. Hot gas roared from fumaroles like a jet engine. As the tourists began to board their boats to head back to shore, they had no idea how many lives were about to be changed. Whakaari was about to show the world just how wild she really is.

Whakaari – also known as White Island – is a stratovolcano that sits 30 miles (48 km) off the northern coast of New Zealand’s North Island. 70% of the volcano’s cone sits below sea level. The visible section of White Island’s cone rises 1,053’ (321 m) above sea level. This means that boats can pull directly up to the summit and the crater is easily accessible to visitors.

White Island is part of the Taupo Volcanic Zone. Other volcanoes in the volcanic zone include Ruapehu, Tongariro, Ngauruhoe (famous for its appearance as Mount Doom in Lord of the Rings), and Taupo Caldera. Whakaari is one of the most frequently active volcanoes in New Zealand. On a scale of 5, the volcano usually sits at an alert level of 1 or 2 on GeoNet’s scale, which describes minor to moderate unrest. Most of the time, activity is limited to steaming fumaroles and boiling mud. The Maori named the volcano “Te Puia Whakaari” which means “The Dramatic Volcano.” It’s easy to see why.

With most of White Island’s cone underwater and a lake in its summit crater, there is a lot of opportunity for water to come in contact with hot gases and molten magma. When water and magma interact, the results can be explosive. There is significant evidence on Whakaari’s slopes for a long history of hydrothermal explosions.

Sulfur mining on White Island was an important industry in the late 19thand early 20thcenturies. In September 1914, part of Whakaari’s western crater rim collapsed and created a lahar that killed all of the miners. This incident put an end to sulfur mining on the volcano. Whakaari began a new eruption phase in 1975. It continued through 2000 in one of the longest eruption phases in history. The largest eruptions on the volcano occurred between 1976 – 1982. In 2000, an eruption formed the crater lake that existed until 2019. Subsequent eruptions occurred in 2012, 2016, and most recently in 2019.

Despite Whakaari’s continual activity, it is home to many species of birds and fish. Australasian gannets flock to the island each year to mate and raise their chicks. The volcano has become a major breeding ground for the black and white bird, along with white-fronted terns, red-billed gulls, and great-winged petrels. BirdLife International has declared the volcano an Important Bird Area because of the number of birds that call Whakaari home.

Fish also call the area around Whakaari home. Yellowtail kingfish live in the warm waters all year. Bluenose and hapuka can be fished in the winter, while yellowfin tuna and various marlin can all be seen during the summer.

For several weeks before the December 9 eruption, the Whakaari volcano began showing increased signs of unrest. Earthquakes had become more frequent and the temperature of the fumaroles increased. Gases in the fumaroles also changed composition, emitting increased concentrations of sulfur dioxide. On November 18, GeoNet, the geologic monitoring authority in New Zealand, raised the alert level at the volcano from a 1 (mild unrest) to a 2 (moderate to heightened unrest).

Below the volcano, magma and superhot gas had risen into the shallow storage areas beneath the cone. Water came in contact with the molten, superheated material. In what volcanologists identified as a phreatic eruption, volcanic gases and steam caused an explosion, launching hot rock and ash 12,000 feet into the air.

At the volcano’s summit, many of the tours had left for the day, but forty-seven people were still hiking through the ampitheater-shaped crater. When the explosion occurred, the hikers had nowhere to go. Twenty-one people tragically lost their lives in the eruption; two of whom are still missing. The other twenty-six sustained terrible burns and injuries, and many are still in the hospital.

Three tour company owners were the first responders to the eruption, arriving via helicopter. They risked their own lives, in danger of encountering another eruption or volatile conditions. Emergency rescue helicopters quickly followed, airlifting the survivors of the eruption to New Zealand hospitals.

While the science of the volcanic eruption itself is intriguing, it is absolutely heart-wrenching any time human life is lost in the wake of an eruption. It is a horrible reminder that we must listen to a volcano’s warning signs when it is signaling unrest. It is also a beautiful reminder of the kindness people can show to each other, and how we can pull together in times of crisis. So many hearts, including ours, continue to grieve the terrible loss from Whakaari’s most recent eruption.

Whakaari/White Island is still very active, and the volcano’s alert level remains at a 2, suggesting moderate to heightened unrest. During the day, plumes of steam and hot gas can be seen rising from the summit crater. At night, the superheated gas is creating an incandescent glow. There have not been any further explosions, at this point, from the volcano since December 9.

The future of the tour companies that once took visitors to the volcano’s slopes is uncertain at this time. Many have started taking tours to other beautiful locations in New Zealand’s Bay of Plenty. While Whakaari is restless, it is wise to keep some distance.